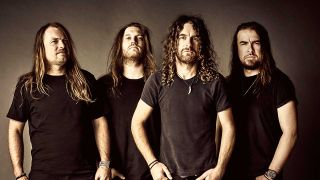 It's mid-afternoon, and Airbourne drummer Ryan O'Keeffe has just opened another bottle of beer. The previous evening the band attended a playback for new album Boneshaker, and afterwards they stuck around, drinking with fans. Ryan eventually staggered to bed at 6am.

This is normal. Airbourne are lifers, committed to the cause. You can read it in their lyrics, you can hear it in their sound. And fifth album Boneshaker picks up where 2016's Breakin' Outta Hell left off: ten tracks of balls-to-the-wall boogie in 30 minutes, a smash'n'grab of pure, party-hardened Aussie graft.

Rock'n'roll for life? You bet. "I was fortunate enough to meet Lemmy and spend a lot of time with him", says Ryan. "And he was like that."

Boneshaker is out now. Airbourne's UK tour kicks off on November 13, with support from Tyler Bryant & The Shakedown. Full dates bellow – Tickets are on sale now.

Below, Ryan gives us his track-by-track guide to Boneshaker.

"Boneshaker was the first track we played in the studio, and the first thing we actually recorded. It was the sound of us getting involved in the way that Dave Cobb [producer] was capturing the record.

"It was one of those ones that sold itself. No one ever knew it was going to be the first single, but everyone just who heard it loved it, so we made it the single and now it opens the record as well."

"We were recording in Nashville, which is a country town, and the start of this song has a slight country twang to it. It was really good to be able to do something like that, especially in Nashville, and especially when we were going out and seeing country bands a lot.

"There are a lot of music great musicians around the area. Every band you see are a hundred percent better musicians than you are yourself. You go out and see these bands playing, and it makes you go back to the studio the next day and play better."

This Is Our City

"Joel came round my house when we were working on lyrics. And we were standing on my balcony, which has a good view of Melbourne City. We were just standing there, talking about our history, and what we used to do. Like we had a residency a pub called the Duke of Windsor.

"Looking over the city we could point out hotspots, and places where we used to go ten or 15 years ago. All of those places have closed now, and we were talking about that. And that's where the title came from."

"It's a title Joel had, and it's a good song in regards to the band playing something slightly different than usual, because it's a shuffle rather than being in 4/4.

"This is a really good song. Joel had the title way back, but the riff was inspired by the old songs that we were listening to at the time, like Tutti-frutti by Little Richard. There's a lot of Little Richard-inspired stuff in that song.

"A lot of bands that have gone through the Nashville area have recorded songs like this, possibly in the same studio we were working in!"

Blood in the Water

"It's something different, you know? When you make a bunch of rock'n'roll songs about guitars, girls, cars and drinking blah blah blah, it's good to have a song that's seen through the eyes of a great white shark."

She Gives Me Hell

"It's a good mid-tempo song. All of the songs we recorded were done on the floor, on the day. We'd literally walk in in the morning, and Dave Cobb would go, 'What do you feel like doing today?'

"So we'd get the guitars out and see what we felt like. And this was just one that came up. It was a real solid song, and I remember going the control room and everyone going, 'Yeah, this is a good one.'"

"The riff for Switchblade Angel has been around for quite a while, since we lived in the band house in Thornbury, in a suburb of Melbourne. We used to live on welfare, eating chicken alfredo and two minute noodles and riders we'd brought back from the road.

"It was on the back burner, but we've always had rifts. We've got probably thousands of riffs just sitting around that Joel came up with. Riffs determine when they want to be used, and sometimes they take a while."

"In Nashville they have a system where homeless people can buy newspapers and magazines for about fifty cents and then sell them for two dollars. While Joel was walking to the studio every day, he got friendly with a bloke who was selling the newspapers.

"One day he brought a copy and there was a double page article about PTSD and Vietnam veterans. That was obviously a subject that many of the homeless could relate to, and when you've done seven songs about cars, booze and girls it's good to be able to do a song that could really mean something to somebody.

"It's kind of shitty to come back from war and there's nothing: That's it. You're done."

"It's something that we've said for a long time – just as a band, to each other – and turning it into a song obviously made sense. It's who we are. We're out here until we die."