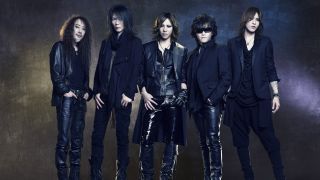 In the late ‘80s and early ‘90s, X Japan became massive in their home country, inventing a flamboyant strain of rock that came to be known as visual kei. Theirs is a storied history: formed by drummer/pianist Yoshiki following his father’s suicide, X Japan was an outlet for extreme emotion, and developed a reputation for out-of-control shows. But when singer Toshi decided to quit, the band split in 1997 at the height of their fame. It would later emerge that he’d been brainwashed by a cult.

The band reformed in 2007, with Toshi renouncing the cult, but there was more tragedy to follow – estranged bassist Taiji took his own life four years later.

Following several big comeback tours, X Japan are now preparing to release their first album in 22 years. We caught up with Yoshiki to find out his top 10 songs from the band’s career.

“It’s a new song, we haven’t released it yet. It’s a 10-minute song, and I think it’s going to be another masterpiece. Usually a song goes first verse, second verse, and chorus, that kind of structure, but this song kept evolving. The crowd [from X Japan’s Wembley show in March] is going to finish the end – it sounds amazing. We just have to mix it. But every single part of it is already tracked.”

“It’s another new song. I wrote it a long time ago, but I wanted to try it with Toshi’s voice, and he did an amazing performance. It’s a ballad. It’s a little different than X Japan’s style. All the lyrics are in English. Kiss The Sky, too. Angel is talking about my own shadow. So basically saying I still see my own shadow, which means I’m still alive. It’s like some kind of suicidal thoughts, but I’m still here – those kind of lyrics.”

“I wrote this song for the movie, [X Japan’s documentary] We Are X. I had the idea, and when the director asked me to write the theme for the end title for the film, I was like, ‘Maybe I should use that song’. So then I started structuring it and finished the lyrics. I don’t know if it’s a ballad, because I play drums super heavy on it. The soundtrack is an acoustic version, but the version that will make it to the album is going to be very heavy.”

“It’s very hard to play, but it’s a pretty interesting song. Very fast. I wrote it over 20 years ago. I really love punk rock, and I wanted to have it as punk as possible, but as melodious as possible. Which is very contradictory. Punk rock never really sees the orchestra, but I tried to combine those two aims. It’s got a punkish kind of riff; people may think that’s just a heavy metal riff, but I was thinking that way. I think that song is pretty popular among X Japan fans – it always makes it to the top five.”

“It still makes me cry every time, when the audience sing that song. It’s the first ballad I wrote. Before that, I was only writing heavy music and thrash metal. But when we signed to Sony Records, the producer said, ‘Can you just write one ballad? Could you try?’ I was like, ‘Okay, so here it is’ – and it just became a big hit. At the beginning, our fans were shocked, because X Japan are more known for a heavy style. But eventually they started liking it, and it became X Japan’s theme song.”

Born To Be Free

“That is actually my favourite! That’s the song I really enjoy playing. A lot of songs like X, or Kurenai, were very hard for me to play. They’re fast, and heavy. So when I’m playing, I’m enjoying them, but I’m also suffering at the same time. But Born To Be Free makes me very happy. Born To Be Free is kind of describing X Japan, because Toshi got brainwashed, and he came back, and he was kind of in a strange world for a while. But when he sings that song, he’s like, ‘We are free’. When I was only playing classical music, classical music followed the rules. I thought rock had more freedom, but people tried to categorise us. That’s why we created our own genre, visual kei, so Born To Be Free’s related to that movement as well.”

“X Japan – we used to be called X – was about to break into the mainstream. Then the A&R people said, ‘You need a big radio hit that will be huge.’ Three months later, I said, ‘I wrote a big hit!’ I start playing it to them, and they’re a bit freaked out. This is not a radio-friendly song! It was kind of ironic, too. The format of radio or whatever should not decide what the artform should be. Why does every song need to be three minutes, four minutes, five minutes? Are we creating a song for MTV and radio? I wanted to rebel against something. Also, at that time, I’d already started feeling some kind of physical damage from playing drums, and all of the mental pain about my father’s death. So I put myself into one room, shut the curtain, and didn’t see the sunlight for at least two weeks, and just kept writing and writing. They played it on the radio, though! But they had to chop it into sections.”

“I have to choose one of [late guitarist] Hide’s songs. Drain is very cutting edge, it’s very strange. We released that song over 20 years ago. That’s his talent. He always saw the future. Even though he’s not alive, he saw that this song would survive all those years. We always exchanged ideas. He’s not only an amazing musician, he was an amazing producer. He pretty much gave me 100% control – I couldn’t believe it. But you know, sometimes I had to ask, what do you think? He just trusted me so much, my tastes, but I also trusted Hide’s tastes. We had an amazing friendship.”

“Jade is almost 99% English, but there’s one part left in Japanese, intentionally. It was kind of like a statement: we are a Japanese band. When we were growing up, I was only listening to those bands from America or the UK. But then I find there’s a rock band that exists in Japan – that was the band Loudness. Very straightforward, traditional hard rock, which is so cool. But X Japan came from a punk rock background, so we wanted to do something different. At that time, a lot of Japanese bands almost wanted to become like a band from the US or the UK. It’s like they didn’t have the, I shouldn’t say this, but the identity.”

“That’s the song that made us who we are. There is a Japanese cable radio station that usually played Japanese Enka, which is folk, or just pop music. They had a top 20, and nobody thought rock music would be in the top 20. If you get into it, they’re going to keep playing your song again and again and again. So one day I heard Kurenai was in the top 20. That was revolutionary in Japan. It actually become number one. Then, we won song of the year, or something like that. So that was Kurenai. The song has a very heavy metal, double bass structure, but a very Japanese melody.”