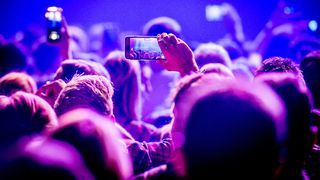 Ticket website Skiddle has carried out a survey of music fans between the ages of 16-30 to discover their opinion about using phones at live shows.

A total of 1200 people responded to the study, which found that only 27% of them wanted to see phones banned at gigs.

Of those 27%, 37% said they were distracting, 34% reported that phones took away from the experience, 20% were unhappy as they blocked the view of the artists, and 8% said filming and taking photographs was disrespectful to the band or artist.

More than half of the 74% who didn’t want phones banned said they “capture footage because they like to relive the experience once they have left the event.”

A total of 24% like to share the experience on social media, while 13% reported that they have the right to use the phone as they’ve purchased a ticket.

Artists including A Perfect Circle, Green Day, Sebastian Bach, Corey Taylor and Disturbed have been vocal about their opposition to fans using phones during live sets.

However, Fear Factory’s Dino Cazares reported last year that fans have the right to use their phones if they wish.

He said: “What does it matter? It doesn’t fucking matter. They should just worry about doing their show. And if a kid wants to watch the show through the phone, then that’s fine – he already paid for the ticket.”

Why you should never ever use your Smartphone at a gig (and, OK, when you can)