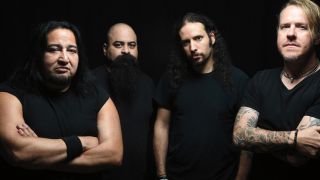 Dino Cazares says he doesn’t have a problem with Fear Factory fans watching their live performances through their phones.

His comments come after a number of high profile cases where artists have expressed their frustration at fans using their phones at gigs, including Disturbed’s David Draiman and Slipknot’s Corey Taylor.

But Cazares says he’s fine with it as fans have paid money to be there.

On a video documentary charting the band’s recent shows across Europe, the guitarist says: “It doesn’t bother me. I know it bothers other people.

“It always seems to be the singers that seem to have issues with it – whether they slap the camera out of the hands of fans, or whether they stop the show to talk shit about somebody holding up a camera phone.

“What does it matter? It doesn’t fucking matter. They should just worry about doing their show. And if a kid wants to watch the show through the phone, then that’s fine – he already paid for the ticket.

“You can enjoy the show however you like. Just don’t throw any bottles at me – that’s a different story. But when you’re in the crowd and you want do what you want to do that doesn’t harm anybody, go for it.”

Last month, Fear Factory’s Burton C Bell said they had discussed touring their 1998 album Obsolete to mark its 20th anniversary. The band recently wrapped up the tour in support of their 2015 studio album Genexus.