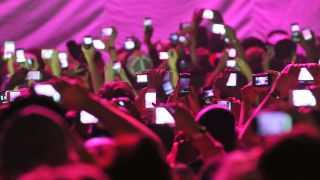 Has anyone got a signal? (Image credit: Getty Images)

Nothing good can come of you getting your phone out at a gig.

One: Everyone behind you will hate you.

Because: you’re at a gig. You got out of the house, you managed to escape from all that bullshit on the telly, you’ve carved out the only break in the day where you’re not gazing at a computer screen, your retinas burning as you check another spreadsheet, or your boss looks over your shoulder. You’ve got a drink in your hand and you’re watching live music. Some of your favourite musicians playing songs you’ve loved your whole life – it’s a once in a lifetime moment, you and the band and the crowd communing as one, singing the same choruses, moving to the same beats, one of those nights when time stops and your worries drop away and… And you’re watching it through your phone, you absolute bell-end.

Two: No one, not even you, will want to see those pictures afterwards.

It doesn’t matter how many Instagram filters you put them through, they’re shit. Leave photography to photographers. Ironically, while you’ve been stood there all night filming and snapping away, flash flickering, blocking the view of the people behind you by holding a Samsung Galaxy right in their eye-line, any professional photographers who are there have only been allowed to shoot the first three songs, no flash. Those same photographers then try and sell them to a local newspaper or music site and get told that they’ll a) take them, but not pay for them because - hey - being on their platform is good for exposure and that’s payment enough, right? Or b) their mate was there and he’s got an iPhone 7 and they’ve got some amazing shots already, fuck you very much.

There was a big sign up saying “No cameras or recording devices”. So now you’ve got a camera on your phone, and the venues and artists are powerless. Forget it’s there. If you want to talk about the gig on social media, think of something to say about it. What funny things did the singer say? What were the best bits? Anything: just don’t think that a blurry shot of some blue lights and a load of hair is making anyone jealous or entertained.

Four: Under no circumstances take an iPad to a gig.

You are effectively holding up a portable television in front of the people behind you. Have a word with yourself.

Five: Think of how the artist feels.

Think of how YOU feel when someone points a video camera at you. Of how self-conscious and awkward it makes you feel. Now imagine that multiplied by thousands. Thousands of people capturing what you’re saying. Capturing the joke you were hoping to use all tour. Sharing that moment you forgot the words or messed up the solo all over social media. Sharing badly-recorded versions of your music on the internet. Imagine you’re, I dunno, David Gilmour – you’re just coming out of the second solo in Comfortably Numb, you’ve been lost in the music and you’re pretty sure that you’ve fucking nailed it – and then you open your eyes and it looks like the whole room is bored and on Facebook. Think of poor old Dave, for chrissakes!

Six: But it helps me remember!

Bullshit. You know what helps you remember an experience? Actually experiencing it. Sure your phone a has a 12-megapixel camera with a 23mm lens with 1.7 aperture. But if you just put it in your pocket, you’d discover a 360 degree, immersive experience in 4D. It’s like actually being there. Because it is.

“But, hang on,” I hear you say. “I like taking a few pictures at a gig - it’s just capturing some memories for later. Something to stick on Facebook. It’s not doing any harm – in fact it’s good word-of-mouth for the bands.”

Fair point. Here are the circumstances in which it is OK to take pictures or video at a gig:

One: If the band is up and coming and/or the hall is only half full.

Promoting young talent is good. New bands need help. There is space for people to move so you’re not blocking anyone’s view. You’re not bragging about having managed to pay £100s to see Metallica from the back of an enormodrome. You are keeping rock’n’roll alive – bingo!

Two: If you do it sparingly.

At the end of the day this whole article could be reduced to these four words: use some common sense. Take a couple of pictures, by all means. Film the crowd going wild or a few seconds of a light show. But you are not Martin Scorsese or DA Pennebaker and filming the whole show or even a full song is ridiculous.

Some bands have started saying to the audience that, if they want to take pictures or film, they should do so in the first three songs or one track in particular. A sensible policy that leads to a guilt-free feeding frenzy. Fill your boots.

When this happens. If this happens near you at a gig and you DON’T film it, you should be ashamed of yourself.

Uli Jon Roth not annoyed by phones at gigs