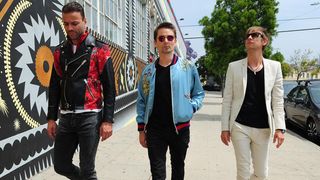 Muse have released a video for their new single titled Thought Contagion.

It’s the first material from the band since Dig Down, which launched in May last year.

The new video was directed by Lance Drake and has an retro 80s vibe, complete with vampires who can manipulate lightning, neon-drenched streets, old arcade cabinets and a Thiller-type dance routine.

Muse have also announced a special “by request” show which will take place at La Cigale, Paris, on February 24.

The show will be streamed live through the band’s Facebook, Twitter, Periscope and YouTube channels, with fans able to vote on what tracks they want to hear in real time.

Tickets will be limited to two per person, with the band clearly stating that names will be printed on tickets and matching ID must be shown on the door.

Tickets go on sale from tomorrow (February 17) at 10am CET via the Muse Members Section.

Muse also have a number of live dates scheduled for later in the year. Find a full list below.