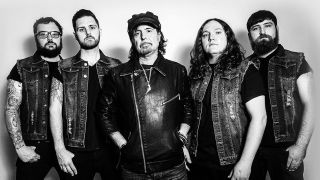 Phil Campbell and the Bastard Sons

Previously named Phil Campbell’s All Starr Band, the outfit are now known as Phil Campbell And The Bastard Sons, as is their record. The lineup includes his sons Todd, Dane and Tyla plus frontman Neil Starr.

Their five-track release was produced by Todd Campbell and mixed by Motorhead collaborator Cameron Webb and it’s described as “raw, gritty, classic and instantly accessible rock’n’roll.”

Starr recently told Kaaos TV (via Blabbermouth): “You know what you’re going to get because Phil is the riff god. You hear those Motorhead riffs – Phil wrote a lot of those.

“So there’s elements of that coming through in the music. I bring my own style to the band, but it’s just rock’n’roll music, I guess.”

Motorhead came to an end with the death of mainman Lemmy in December. Drummer Mikkey Dee has just been confirmed as a full-time member of the Scorpions.

Phil Campbell And The Bastard Sons is released via Motorhead Music on November 18 and it’ll be available for pre-order from September 30, along with an instant download of opening track Big Mouth. The band tour Europe starting next month – full dates below.