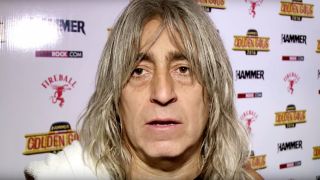 Mikkey Dee believes late Motorhead leader Lemmy is proud of what his band achieved, and that the icon is “up there” or “down here, somewhere, just laughing.”

The rock world has continued to pay tribute following Lemmy’s death in December at the age of 70, soon after he’d struggled with frail health to complete a European tour.

Honours include the Download festival’s main platform being titled the Lemmy Stage, and the final race in the Swedish V8 Thunder Cars tournament renamed the Lemmy 500.

Speaking at this year’s Metal Hammer Golden Gods in London earlier this month, Dee tells Red Carpet News TV: “I’m sure he’s happy, he’s proud about what he has done and what we have done. People are honouring him everywhere – they’re naming stages and car races.

“He’s up there, he’s down here somewhere, just laughing. I kept saying, every snare hit I do from now on until the end of my career will be a small tribute to Lemmy, the man and friend and bandmate that I had.”

The drummer worked with Lemmy for 23 years and says his bandmate was “so unique” as a musician and a person. He adds: “I think we went out with a bang, a big crash, a fantastic way of finishing off the band. I couldn’t believe that Lemmy actually cold play, knowing that… Well, we struggled on the European tour.

“But when he walked on stage he was unbelievably good. Then he suffered from energy loss – but no one thought he was going to pass away.”

Asked about Lemmy’s legacy, Dee reflects: “No one can step into Lem’s boots, for sure. But there’s great bands out there. A new generation that kicks ass.”

Dee and Motorhead colleague Phil Campbell performed a Lemmy tribute set at the Golden Gods with assistance from Saxon. They’ll deliver a similar performance at the Lemmy 500 in Ljungbyhed, Sweden, on September 24.