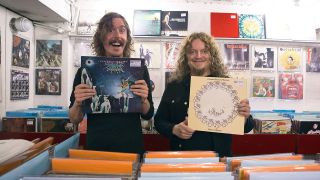 Listen…” says Mikael Åkerfeldt, Opeth’s vocalist, guitarist and bandleader. His voice drops to a whisper as he opens a vinyl copy of The Beatles’ Sgt Pepper’s Lonely Hearts Club Band. “Can you hear it? The crackling sound when you open and close the record.”

The tall, skinny, black-clad Swede does it again. This old version of Sgt Pepper makes a good crackling sound. But he’s looking for a rare pressing with the matrix number printed inside the gatefold.

A few racks along in Flashback Records in Islington, North London, Opeth guitarist Fredrik Åkesson – he of the curly hair and fuzzy Tutankhamun beard – turns to the singer and frowns. “There’s no Mahogany Rush,” he announces with the air of a thirsty man who’s just been told the pub has stopped serving.

Maybe there’s not much call for Canadian hard rock bands round these parts. Seconds later, though, Åkerfeldt is holding a copy of A Farewell To Kings by the other Canadian rock band also called Rush. He gazes at the inside sleeve’s band portrait and nods approvingly – no words are necessary.

You know you’re meeting serious collectors as soon as the Opeth men arrive this afternoon. They’re both carrying bags from an earlier visit to Reckless Records in Soho. In fact, Classic Rock’s Brexit-depleted £50 is a drop in the ocean compared to what Åkerfeldt has already blown on vinyl during this flying visit to London.

Flashback owner Mark Burgess opened his shop on Islington’s Essex Road in 1997, followed by branches in Shoreditch and Crouch End. Flashback’s racks bulge with everything from grime and dubstep to New Zealand indie; from old ska 45s to UFO’s Let It Rain single in a dog‑eared picture sleeve.

Burgess is an Opeth fan and knows their lead singer collects 70s rock and anything on the Vertigo label. “They’ll be wanting the basement,” he told us earlier. And he’s not wrong.

When Åkesson finds an LP he doesn’t know, he waves it at the singer. Åkerfeldt then nods or shakes his head and delivers his verdict.

Åkesson and Åkerfeldt are 44 and 42 respectively and children of the 80s metal boom. Opeth started out as a grunting death metal band in 1990 before morphing into witchy hard rockers with prog tendencies. And you suspect this transformation was engendered by their lead singer crate-digging in record shops like this.

Of the two, Åkesson takes a more scattershot approach to record hunting. He pulls out Rory Gallagher’s mid-80s LP Defender – “Malcolm Young said [adopts Aussie-via-Swedish accent] ‘You gotta listen to Rory Gallagher’” – then puts it back. Later we find him examining the origami-style folding sleeve for Alice Cooper’s From The Inside: “What year is this? 1978. His drink and drugs period… Good cover, though.”

In contrast, Åkerfeldt has a mental list of items he’s looking for. On that list is a mis-pressing of Black Sabbath’s debut album that plays side one of Manfred Mann Chapter Three’s first album instead. It’s not here, so instead he pays with his own money for Sabbath’s Master Of Reality with a band poster inside. “There’s another rare version, with the song Sweet Leaf spelled Sweet Life on the sleeve,” he says. “I’m always looking for that.”

Unusually, in an age when you can hear any music if you Google hard enough, these two guys relish buying albums without having a clue what they sound like. Åkerfeldt has picked up the 1970 debut by Arrival (“I have no idea who they are”), and is strangely drawn to a 1973 LP by a band called Spiteri. “I don’t know what this sounds like, but it has a snake on the cover,” he says, “and that’s got to be good.”

Not always. An impulse purchase based on a great cover can sometimes spell disappointment. “It happened to me with Whitesnake’s Lovehunter,” Åkesson admits. “I loved the cover” – a naked woman and a snake – “but it wasn’t heavy enough for me at the time. Nowadays, of course, I love bluesy Whitesnake.”

Åkerfeldt has been burned too. “Yes, the Molly Hatchet mistake,” he sighs. “Because of their striking sleeves, shops put them in the metal section, and I expected something that sounded like Manowar.”

Åkesson strolls over with a copy of Swedish prog pioneer Bo Hansson’s Music Inspired By The Lord Of The Rings. “Lots of Hammond organ,” says Åkerfeldt.

Sticking with the Swedish theme, the singer fishes out an LP by native 80s pop group Roxette. “We did one of their songs,” he declares. (Opeth covered Roxette’s Den Ständiga Resan on their 2008 album Watershed. The English translation is The Eternal Journey, which sounds like a very Opeth sort of song title.)

Later, over coffee in the Italian café next door, Åkerfeldt blames his obsession on a vinyl-deprived childhood. “I didn’t have any allowance,” he says, “so the only time you got a record was Christmas, birthdays and, maybe, one other occasion a year.”

Both musicians discovered rock when they were around eight years old.

“The first album I bought with my own money was Iron Maiden’s The Number Of The Beast,” says the singer. “But I couldn’t buy as much as I wanted. And I think this [he pats his Flashback and Reckless Records bags] is a symptom of that. This part of me was pushed down for many years. But now I have the cash, I’ll buy Michael Schenker Group’s Assault Attack ten times over because my mother and father wouldn’t let me when I was young.”

Fellow Stockholm resident Åkesson recalls making his first LP purchase, AC/DC’s For Those About To Rock We Salute You, at his local shopping centre. “The second album I bought was Iron Maiden’s Piece Of Mind. And then Assault Attack.”

What is it with these two guys and Assault Attack? It’s not even the best MSG album, is it.

“I love it,” they both reply almost in unison, before Åkesson explains: “I love that thick, early-eighties production, and Graham Bonnet’s vocals.”

“Didn’t his jeans split once and all his… stuff fell out?” Åkesson asks, gesturing towards his groin.

In fact it was Graham Bonnet who exposed himself at an MSG gig. “Ah, yes.” They both nod sagely, lost in the glory days of 80s metal and its hapless, penis-exposing lead singers.

Sticking with that theme, Åkesson opens his Reckless Records bag and pulls out a picture-disc copy of Ozzy Osbourne’s Diary Of A Madman. “This was a huge album for me,” he says. “I collect picture discs and hang them on the wall. In fact I have a wall of classic metal albums.”

What else is on that wall?

Meanwhile, Åkerfeldt opens his record bag and takes out ex-Move and Wizzard mainman Roy Wood’s 1973 solo album Boulders. It was modern-prog guru Steven Wilson who turned Åkerfeldt on to Boulders, which he picked up for £3. “Roy has a way of writing music that clicks with me,” he explains. “I’m not sure if his lyrics are meant to be tongue-in-cheek, but they sound like they are.”

How many albums do these two own?

“My record collection is around six or seven thousand,” Åkerfeldt replies. “But I have another two to three thousand which are duplicates.”

“I’m not as obsessed as him,” Åkesson insists. “These days I only have around two hundred. There was a leak in my cellar, so half the albums I bought when I was young were destroyed.”

He looks crestfallen; Åkerfeldt shakes his head sympathetically. “I had a signed copy of Yngwie Malmsteen’s Rising Force in that cellar. Also a signed copy of Kiss’s Animalize. Not one of their best, I know.”

Apart from keyboard player Joakim Svalberg, the rest of Opeth don’t buy LPs on this scale. It’s an expensive hobby, especially for Åkerfeldt. On the band’s last US tour he ended up shipping six big boxes of LPs back to Sweden. Fortunately, his girlfriend takes music as seriously as he does. Opeth’s new album The Sorceress was recorded after she gave him a crash course in jazz.

“She loves John Coltrane,” he says. “I’d heard [his 1965 album] A Love Supreme before but found it too difficult. She played me My Favourite Things, which is easier, and I got into him through that.”

Not that Coltrane had any influence on The Sorceress. Instead it was inspired by Åkerfeldt’s 6,000-strong record collection. One song, The Wilde Flowers, is named after the 60s Canterbury band that included future members of Soft Machine and Caravan. Another, The Seventh Sojourn, is taken from a Moody Blues album title. And “Chrysalis is named after Jethro Tull’s record label,” he says.

In fact, Tull were such an influence on The Sorceress that two songs had the working titles Jethro 1 and Jethro 2. It seems Steven Wilson recently turned both musicians on to the lesser-visited corners of Jethro Tull’s catalogue. “There’s an album called Stormwatch [’79] that nobody much talks about” Åkesson says, “and I became slightly obsessed by two songs on it: Orion and Dun Ringill.”

The Sorceress was recorded at Monmouth’s world-famous Rockfield Studios. Queen, Rush and Hawkwind are among many who recorded there. “And Budgie,” Åkerfeldt adds.

The singer bombarded Rockfield’s co-founder Kingsley Ward with questions about the giants of 70s rock, but found his answers wanting: “I said: ‘What do you remember about Judas Priest recording Sad Wings Of Destiny here in 1975?’ He said: ‘Nothing.’”

With this afternoon’s shopping having come to an end, the pair collect their record bags and head off to conduct some important band business. But, of course, there will be another record-shopping expedition before too long. “You can never have enough records,” Åkerfeldt says finally.

And with that they’re off, two dedicated music lovers forever seeking that elusive Mahogany Rush LP and the reassuring crackle of an old gatefold record sleeve.

“I probably have ten copies of this, and I’ve just bought another one for twenty-five pounds. I don’t need it! But it is a favourite of mine so I have to have it. Uriah Heep were a very popular group in Sweden. Demons And Wizards was their fourth album, but I could have chosen any of the three before. My daughter Melinda is named after the song Come Away Melinda on their first album [Very ’Eavy, Very ’Umble].

“I actually like everything they’ve done. Even their albums from the late seventies, which are a bit sketchy, have one or two good songs – like Return To Fantasy. I even loved an album they did in the eighties called Equator. It has a great song on it called Skool’s Burning.”

“This was actually a recommendation from Mikael. PFM [as they’re usually known] are an Italian band from the seventies. My ex-girlfriend’s brother had a friend who I think was their drummer’s son, but I’m not sure. I just phoned her to check for you but she told me to call her brother instead. She couldn’t remember [laughs].

“I’ve never heard it, but apparently it’s progressive rock, but almost classical music with lots of acoustic guitars and mellotrons. Photos Of Ghosts is their most well-known album. There is a version with Italian vocals, as well as this English version. The Italian version is rarer. I’m very curious to hear it.”