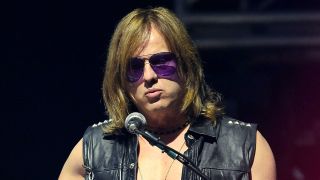 The keyboardist and bassist claims Rose promised him $125,000 for his work during 2011, which he couldn’t afford to pay at the time.

Now that the band’s reunion tour with classic-era members Slash and Duff McKagan has made more than $100m in the past few months, Pitman says he’s due his wages plus interest, TMZ reports.

Pitman, who joined Rose’s band in 1998, was left out of the reunion lineup in April, and he issued an angry tweet calling Rose’s project a “cash grab” and a “nostalgia trip.”

He later apologised, but went on to say he’d quit the “oldies band” because “they just want to repeat that 30-year-old music over and over.”

Meanwhile, a source close to Guns N’ Roses has claimed that former guitarist Izzy Stradlin rehearsed with the band before deciding not to take part in the reunion.

Stradlin said last week that he’d refused to appear because the band “didn’t want to split the loot equally.”

The source, known as MSL, says via the GN’R Truth forum: “Izzy was in rehearsals at one point and was negotiating to appear at a few of the April gigs. Equal pay was never discussed. A five-figure fee per cameo is what was being negotiated.

“They were far apart and Izzy bailed. He doesn’t need their chump change and they don’t need to throw away money on a guy that isn’t gonna sell many tix.”

Guns N’ Roses tour South America in October, followed by dates in Japan, Australia and New Zealand, with further appearances to be confirmed in due course.