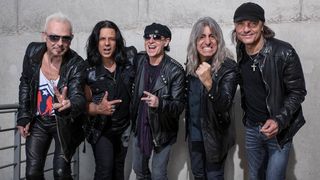 Dee hooked up the German metal heroes for their run of tour dates earlier this year, standing in for James Kottak, who’s had a turbulent recent history with the German outfit. He took a step back for medical reasons.

Now Scorpions report that Dee has taken Kottak’s place in the lineup as a fully-fledged member of the band, and they’ve thanked their former sticksman for his service.

Scorpions say in a statement: “We would like to thank James for so many years of lasting participation in the band and personal friendship. We understand and respect his need for time as he makes his way through the final stages of his healing process.

“After our incredibly successful shows in the US, Europe and Asia, we are sure to have found a fantastic drummer with Mikkey Dee. He brings a fresh energy to the band and we look forward to the exciting time together that lies ahead.”

Dee says he “honoured and fortunate” to continue his career and adds: “I grew up listening to Scorpions and have always loved the band. We have been friends for a long time so traveling and performing this year with Klaus, Rudolf, Matthias and Pawel has been loads of fun and the crew is very professional.

“The Scorpions fans has been most welcoming and its been great to meet all the crazy wonderful Motorhead bangers along the way.

“I had some close to 25 amazing years with my friends and brothers Lemmy and Phil in Motörhead and that will always be the backbone in my future drumming.

“Lemmy always had great respect for Scorpions for being a real rock band and I am sure he is proud up there that I moved on and for playing with this class act. Here’s to many more years of rock’n’roll.”

Scorpions have a handful of German shows scheduled for December, while the documentary Forever And A Day charting the group’s 2011-2012 Final Sting tour will be released on DVD and Blu-ray on September 30.