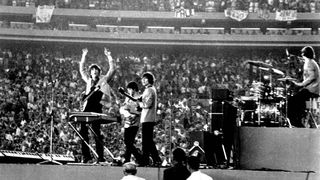 The documentary film of The Beatles’ Shea Stadium show has never been officially released on video or DVD, but has been given a serious lick of paint to accompany Ron Howard’s Eight Days A Week – The Touring Years movie. Here’s what we learned.

1. The noise is intense

It might be stating the bleedin’ obvious, but the noise created by 55,000 screaming girls and their presumably perplexed guardians is enormous, especially when it’s pumped through a cinema PA. Like a swarm of bees engaged in a fight with another swarm of bees. At an airport. As the Space Shuttle departs.

In these days of stadium tours and outdoor festivals it’s easy to take big crowds for granted, but back in 1965 this was all new. And, for the most part, the band look somewhat bewildered as utter carnage unfolds in front of them.

At the end of each song the screaming rises to a new crescendo, but there’s very little actual applause. And the overhead shots that sweep the crowd don’t show people with their arms in the air like they just don’t care in the manner to which we’re accustomed.

4. John Lennon is in charge

Despite McCartney’s chirpy interactions with a crowd who can’t hear a word he says, it looks like the John Lennon show. He gets a mic to himself, and he sings lead for the first half of the set.

The biggest band in the world play a stadium, and you get a 30-minute set, three cover versions and no encore. In 2016, people would trash their seats before filing a class action lawsuit. But in 1965, people merely screamed unnecessarily and (although this may be be an urban myth) wet themselves.

6. This band could really play

Despite the fact that they couldn’t hear themselves, there were no monitor speakers and the sound was being pumped through a tannoy system more regularly used for making baseball announcements, The Beatles are in sync throughout. Ringo Starr once said he was able to keep time at the show by watching the other musicians’ bottoms move. All that hard work really paid off.

7. The new sound is amazing

The boffins at Abbey Road have tweaked the EQs and deployed the algorithms, and the concert now sounds like it should, not like a distant fairground being dismantled.

A couple of times the camera alights on the band’s manager as he shuffles nervously by the side of the stage. Although obviously proud, he looks as comfortable as a funeral usher at a clown convention.

9. It’s the most exciting 30 minutes in the history of rock’n’roll

It just is. Accept it.

At the time of the show, The Beatles were one of the best live bands on the planet. A year later, after playing Shea again — and falling 11,000 seats short of a sell-out — they quit touring to become the best studio act in the world. And that’s some trick.

The revamped Shea Stadium footage will screen only in cinemas as part of the release of The Beatles: Eight Days A Week - The Touring Years from September 15. Find a screening.

The Beatles: Eight Days a Week - The Touring Years review