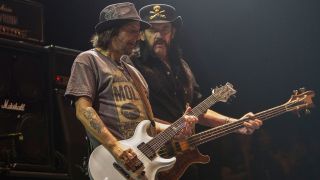 A while back we chatted to Motörhead's Phil Campbell about his band causing brain injuries, what songs he likes to cover and why he loves Monty Python's Flying Circus. Originally recorded for the Metal Hammer Radio Show, you can read the interview in its entirety here.

Are you familiar with this story in the news about Motörhead causing brain injuries?

“I read it on a paper, on a train coming up. It happens all the time.”

They said it was specifically Ace Of Spades. What do you think about that? Is it fair?

“No, that’s just journalistic crap. The guy probably banged his head against a railing or something. It’s nothing to do with Ace Of Spades, or the music.”

We imagine it’s not the first time Motörhead have been misunderstood. What other clashes have you had?

“We don’t have a problem with anyone, we just do our thing. If people get into trouble when we’re playing, that’s their problem. It’s a bad thing, but we don’t try to get people into trouble.”

What’s the worst on stage injury you’ve had?

Did you keep playing?

So tell us a bit more about Phil Campbell’s All Starr Band, you’re returning to Bloodstock later this year. How did this all come about?

“It was just a fun idea, I just wanted to do something different. I got some great players playing some of my favourite cover songs. It’s just fun, anyone can join up for a song or two, that’s the fun thing about it! We’re doing Bloodstock again this year, we have a tour coming up, we have some shows in August, we have a French festival, it’ll be fun, we’ll see what happens.”

What’s your favourite song to cover?

“It’s got to be Nutbush City Limits, it’s great. When I told the band I want to do this, they were like ‘Oh no, you can’t do that’, and I said ‘Just trust me’. It seems to get everybody moving, more than a lot of other songs.”

How do you rate Tina Turner as a performer?

“She earns her money, doesn’t she? Let’s put it that way. She’s great, fantastic.”

Do you reckon it’s true that she taught Mick Jagger everything he knew about stagecraft?

“They’re both wonderful at what they do, it’s a similar kind of thing, but they’re both originals really. I’m not going to knock any of that, it’s great and I could watch any of them.”

“That’s right, my kids bought some tickets for me and a couple of them before any of this Hyde Park stuff was announced, so yeah, we’re going to see the fourth show tonight. So as soon as I get changed we’re off to see Monty Python.”

What makes Monty Python so special for you?

“Well, there’s nothing quite like it. They were so stupid, some of it was really clever, some of it was stupid, but it was all groundbreaking. Nobody dared to do the stuff they came out with, in my opinion. Generations and generations are going to be picking up on it, so for someone like me who has been watching it for 30 or 40 years, to go and see them live, for the first and only time in my life, is a real treat.”

Do you think people are daring enough these days? That’s there’s that same amount of courage?

“Everybody’s got to be more politically correct these days, which is bullshit. If it was up to me, everybody should go back to the old days, just say what you think. You get thrown in jail now if you say the wrong bloody thing, or whatever.”