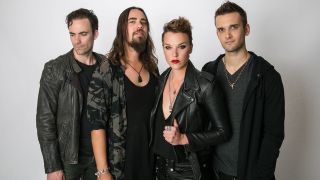 Halestorm have announced that they will release a new six-track EP titled Halestorm: Reimagined.

The band uploaded the cover art to their social media channels, revealing that it’ll include their tracks I Miss The Misery, I Get Off, Break In, I Am The Fire, Mz Hyde and a cover of Whitney Houston’s I Will Always Love You – which has previously appeared in Halestorm’s live sets.

The band’s new take on Break In, which originally appeared on Halestorm’s 2012 album The Strange Case Of…, will feature guest vocals from Evanescence’s Amy Lee.

The EP was recorded last autumn in Nashville with producer Nick Raskulinecz, with vocalist and guitarist Lzzy Hale and guitarist Joe Hottinger teasing the release in December last year.

Hottinger told Guitar Bonedo: “It's something we've never really done before. Everyone's expecting a covers EP, but we wanted to to shake it up a little. Technically, it is a covers EP – you'll find out. It's cool."

There’s no firm release date yet, but in an interview with AltPress earlier this month, Hale said: “We’re going to release it in August, and there’s a duet with Amy Lee on there. She was nice enough to do this.

“We ended up redoing a song that we recorded on our second record called Break In years ago when we toured with Evanescence. Amy loved the song and would come out and sing it with me live onstage.

“When we decided to redo this song, I was like, ‘I wonder if Amy would want to do it?’ Without even hesitating, she said yes so we set up this studio. Basically, it was two microphones in the same room, so there’s a lot bleed. We literally had to record at the same time, front to back, as a performance and get it right.

“It was such a magical moment because she has such an amazing voice, and we’ve always had this mutual respect for each other’s voices, but to actually do it in that way… It was an experience I’d never had before with any other singer, and I’m just so glad that we got it on tape.”

Lzzy Hale is one of the cover stars of the new issue of Metal Hammer magazine, which is on sale now.

In issue 338, we find out how some of your favourite artists have been spending lockdown and ask them how they’re planning for the future.