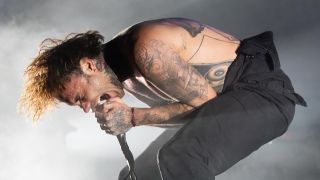 Jason Aalon Butler isn’t afraid to share his views. The incendiary Fever 333 frontman is one of the most astute and articulate men in rock and when it comes to sharing his opinions on life, we knew we’d be in for something deep. Here’s the man himself on the election of Donald Trump, the power of music, life after death and the idea of race.

“I do not subscribe to any sort of religious regime, but I do believe that faith of some sort is necessary for certain individuals, and I respect that. I don’t believe in action against other humans in the name of anything based on just belief, but I do think that there’s much much good, especially in the way of morality for people, that has been spawned from religion. You don’t have to say you’re this or that in order to be a good person, but like I said, I don’t condemn it. What I believe in isn’t necessarily what everyone else should believe in. Unless you’re racist, then fuck you.”

“When the US election results came in it was a dark day. It was the most surreal moment I’ve felt since I left the hospital on too much morphine as a child. I exist so largely in a world that told me that it couldn’t happen, that that sort of evil couldn’t prevail, and now here we are, and he’s the man that will lead the free world. For me to get a grasp on it was really difficult because I think that we live in a bubble and I was living very much in a leftist bubble, in a liberal world, where I believed everyone on my immediate social media feeds because we were so staunchly against the Trump administration. I also believed that our country wouldn’t allow something like that to happen, and realise he is a bigot and a misogynistic piece of shit. He is the thing that most Americans hate the most; he is the thing that means the wage gap is so large, he is the reason we can’t have healthcare to provide for our families and the sick based on a socialised method. But his rhetoric, the way that he’s spun this large web of bullshit to your common person in America, he was able to catch people as if he wasn’t the corporate, billionaire, underhanded liar.

“It’s just a really really odd time for us politically and socially. The wall, the Muslim registry, all of these things that he’s trying to omit were said, and these ideas were put into the mentality of America. And now, the people that were in hiding are now finding a forum to feel vindicated in their racism and ignorance. I do believe, if nothing else, that we will see the most divisive era in our country’s history after segregation. We’re looking at a really insane time, the separatism is frightening. But I guess I wanted to know who these people are and smoke them out.”

“My most cognitive moments are with music – seeing my father play rock/soul in a weed smoke-filled room, to me that was cool. Listening to music as my mother cleaned the house. Trying to learn guitar ‘cause my dad didn’t want to teach me by myself. Watching Michael J Fox in Back To The Future 1 and 2 with his guitar, being cool as fuck… And finding a respite and solace in different types of music as a child when I couldn’t go outside. There were times when I was out in my backyard and I’d have to be pulled inside because someone was shooting bullets in the air and falling into my backyard, so I’ve gotta go inside, and what do you do? You do art. Music has been the one constant. Music has been the one consistent thing I’ve always had. Music has been the key to whatever the fuck I’m trying to do.”

“I’m not afraid of dying. When I was younger I was really sick and was making provisions to possibly face death a lot sooner than I had anticipated or hoped for. I believe each time you do something in a way that satisfies you, you should do it. I don’t know what happens; I believe in energy, I believe in this universe, I believe in inter-dimensional movement, I believe in all these things but I don’t know which one will take precedent when I go to sleep forever. I think the consciousness is a real thing, it moves within and without us, but I don’t wanna die. I think a long time ago I was challenging my own mortality because I wanted to feel something more than the banality of just being, but I’ve realised that’s not what I want. I’ve found love, that’s a really important thing in life. I wanna have a family, I love my wife, I love my dogs, I wanna be a father, I wanna do music… but if I was to walk outside, slip and die, I was ready. I’m always going to be ready. It would suck to be caught off guard.”

“I like knowing that I’m being active, knowing that I’m truly involving myself in what I believe in, instead of just talking about it. People take the time to leave their house to go to the store, that’s fine, they need food. People go to the doctor because they need to be seen, they might be sick. But if you leave your house, not get paid, not get food, all you’re getting is an idea and you’re giving yourself to something more than you need personally. It’s not just a fucking fad, it’s not a trend, it’s not about making the front page – protesting’s dirty. Protest is not glamorous, protest is not safe, it’s dangerous because it’s so effective and that’s what people need to understand. Nothing that was ever worth a damn was easy, and for people to go out and protest, that’s when you really put into effect what you’re talking about – especially now in an era where everyone is putting up links on Facebook and tweeting. It’s so prevalent and abounding, it only highlights when you actually get your ass up out of your fucking house and stand in front of somebody saying ‘We’re not going to take this shit.’ I think we as Millennials need to understand the power is within our physical actions, not just on the internet.”

“I got my first tattoo at 14. I was dumb, everyone in the hood was getting tattoos, so I wanted one too. For anybody that reads this, don’t get a tattoo when you’re 14 because I ended up having to get it covered up and ruined some prime real estate on my body. When you’re 14 you think a couple of stars and some words is cool to get, but it’s not! I basically got these words that didn’t make much sense but I thought I was hard. I kept getting tattooed and for the most-part the person I’ve been going to over the past ten years is Brendan Rowe, who’s an amazing artist, and has a shop in LA. I made the decision recently to get my back finished up to my head, but my throat is the one I’m worried about because I don’t want to be another rock ‘n’ roll dude who’s tattooed to look alternative… but at the same time I like looking alternative!”

“People of colour are being subjugated, exploited, disenfranchised intentionally. This is centuries worth of pain and having a giant light-coloured hand on top of you keeping you in an area, socially engineering the way that you live so you’ll never get past a certain point. That’s by way of policy. People are eventually going to have to understand that these aren’t complaints, these are facts. These aren’t emotions running a little high, these are true events to make people feel a certain way intentionally. Eventually all of us are going to have to see that there are differences between us but that doesn’t make us un-human. You will never dehumanise us. Our uniqueness is what makes us human beings. But right now, in America, we’re not all equal. Societally, politically and economically we are not equals and there are people making sure it stays that way.”

Fever 333’s debut album Strength In Numb333rs is out now