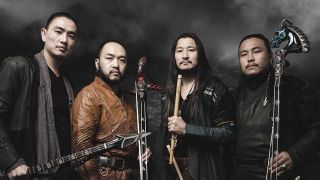 Galbadrakh Tsendbaatar is used to fans of his band not speaking his language. It doesn’t worry him, though. Broad and barrel-chested, with a soft-spoken manner that’s part Zen master, several parts laid-back metalhead, the throat singer/morin khuur player (who goes by the name Gala) has a more subtle, even spiritual, outlook on the connection between band and audience.

“Music transcends any language,” he says, speaking through The Hu’s manager/interpreter, Tuga. “Even when we were growing up and listening to Western rock bands, to this day I still don’t understand some of my favourite songs. But [through] the music, the rhythm and the tune and the way it’s delivered… It’s something special. You’re able to ‘understand’ everything because you feel it.”

It’s worked for Rammstein and BabyMetal, and now it’s working for The Hu, big time. Having broken YouTube in late 2018 with their first single, Yuve Yuve Yu, and generated further zillions of streams with follow-ups Wolf Totem and Shoog Shoog, The Hu have drawn a growing sprawl of rock fans, indie kids and many others to their deft, infectious cocktail of ancient Eastern music and riffy Western metal – or ‘hunnu rock’, as they call it.

They played their first gig in May last year. As of tonight they’re up to 101 and they keep getting bigger, spurred on by debut album The Gereg.

“We love this touring life because we’re building something we love,” says lead singer/wind instrument player Nyamjantsan Galsanjamts (aka Jaya). “On our first tour here our average venue size was three-fifty to four hundred, and today we’re playing for fifteen hundred. Even our buses: our first one was a tiny little thing, and now we have a double-decker. This experience is so special.”

Squashed into a tiny backstage room at London’s Electric Ballroom, sitting on low-slung black sofas, The Hu look like the sort of 30-somethings you’d meet at Download festival – probably watching Slipknot or Metallica – with their bus-fresh black jeans, boots, tattoos and hoodies.

As well as their traditional throat-singing and stage instruments (most strikingly the morin khuur, or ‘horsehead fiddle’), between them they play electric guitar, bass and drums. They’re all accomplished pianists, too, from their training at the Mongolian State Music And Dance Conservatory, where Jaya also taught for 10 years.

Somehow they found time to play Western covers in other line-ups. “Toxicity by System Of A Down,” says Enkhsaikhan Batjargal (aka Enkush), lead morin khuur and throat singer. “I used to play that.”

The four men were selected to form The Hu in 2016 by local producer Dashka, who dreamed of creating a genuine marriage between traditional Eastern sounds and contemporary Western rock/metal. A number of Mongolian bands had already emulated the latter, but The Hu were born out of a desire for something fresher.

With their combination of traditional musicianship and throat singing (cultivated since they were all about 10), classical discipline and experience in rock bands, the line-up were well-suited to the task. But it would be more than two years until they had anything to show.

“Even though the band started in 2016 we never played any gigs,” Gala explains. “We were in a room just creating our music and planning this unique style for so many hours. There were times [when] it would take an entire month for one song.” To further understand The Hu’s work ethic, it helps to go back to their childhoods.

Jaya and Enkush grew up in western Mongolia, the country’s remotest region, living a centuries-old nomadic lifestyle during the summers. During those months their world was one of riding horses and herding sheep, camels and goats on vast plains dotted with glacier-topped mountains.

“Some days my duty would be just taking care of the entire sheep flock all day,” Jaya recalls, “staying with them, protecting them from wolves. And the next day I might have to take care of the horses. It’s a never-ending process.”

“I grew up about the same,” Enkush says. “Nobody sits around, everybody chips in. It doesn’t matter how old or how young you are, there’s always duties to do.”

Even for Gala and Temka, who grew up in cities, summers were spent in this way (“every Mongolian has relatives and extended families in the countryside,” Temka says matter-of-factly).

After Communist rule of Mongolia ended in 1992, restrictions on imported Western music were lifted and they all started listening to records by Led Zeppelin, AC/DC, Pink Floyd and more, as well as the traditional Mongolian music they’d grown up with.

As they prepare to leave to do vocal warm-ups, Gala recalls another cultural influence, one that hints at the visual side of The Hu’s appeal. “There’s a historical Mongolian film called Queen Mandukhai, and music that goes right before the big battle scene, I just loved that,” he says. “I used to sing it, and my brother heard it and was like: ‘He can be a musician!’, and he encouraged me and helped me to start getting lessons.”

An hour and a half later this battle-esque quality is being acted out on stage. The packed room laps up every note and shout-out (whether in Mongolian or English). It’s primal, huge fun, often deeply rousing.

Jaya is the most outwardly rockstar-ish, in a leather jacket and T-shirt, while his bandmates are in traditional dress, but they all exude warrior levels of confidence. It’s a total transformation from their quiet, courteous manner earlier.

“We’d like to write albums and songs that will go for centuries,” Gala says seriously, “and we want to be one of the legendary bands out there. That’s our ultimate goal.”

The Gereg is out now. A deluxe version is released on July 10.