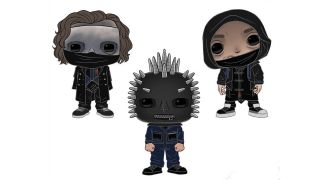 Funko have unveiled the next series of collectable figures in their Pop! Rocks range.

At this week’s London Toy Fair, which is currently running at the city’s Olympia, Funko raised their horns in celebration of Slipknot, Slayer, Motorhead, Ghost, ZZ Top and Weezer.

And while the designs are still at the concept stage, they’re looking pretty special.

The Slipknot designs show Corey Taylor, Sid Wilson and Craig Jones in their We Are Not Your Kind guises, while the Slayer range features Tom Araya, Kerry King and the late Jeff Hanneman.

There’s a new Lemmy design along with an axe-wielding figure complete with Motorhead’s Snaggletooth mask, while Ghost are represented by a Papa Nihil design.

And as if that wasn’t enough, Funko also lifted the lid on a design for Weezer’s Rivers Cuomo and the ZZ Top trio of Billy Gibbons, Dusty Hill and Frank Beard.

Check them out below.

There’s no word yet when these will hit store shelves but this latest batch of creations is already amazing.