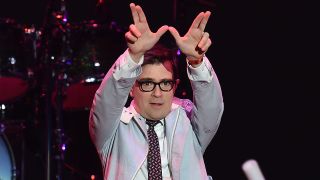 Weezer have no right releasing the amount of brilliant songs they have done. Since their self-titled debut in 1994, the Californian alt-rock legends have thrown out 11 full-lengths of varying – really varying – levels of quality, all harbouring at least a few gems. With them back in the headlines and your social feeds with an unexpected cover of Toto's Africa, we cast our eye over Weezer’s sunny catalogue and rank it from bogus to Jonas and beyond.

Called Raditude because actor Rainn Wilson thought it was a good idea, Weezer’s seventh LP is as scattershot as the catapulted canine on the cover would suggest. (If You’re Wondering If I Want You To) I Want You To is a shimmering pop gem and The Girl Got Hot’s gang vocals are like Weezer doing Springsteen’s Spirit In The Night, but it all lacks the rugged charm of the band’s best material. Rivers Cuomo’s lyrics have always been one of the band’s most unique qualities, but having him duet with Lil Wayne on Can’t Stop Partying and crooning ‘You are my baby tonight and I’m your daddy’ on I’m Your Daddy is, to be blunt, fucking creepy. Raditude’s second half suffers further, coming off as Maladroit cast-offs that got rushed in on a stretcher with several limbs missing; the album’s not all bad but Christ, most of it is.

Riding off the back of, retrospectively, four exceptional albums, Make Believe could’ve saved Weezer years of catching up; seeing as Rick Rubin was producing, the band may as well have been left in the woods with no aid whatsoever. Their pop rock formula was boiled down to the point where you’re not sure if they’re being ironic or not with the radio-bothering Beverly Hills, whereas This Is Such A Pity’s bubbling electronics and synths plant the seeds for some of the band’s ill decisions further down the line. Cuomo’s lyrics on tracks like Pardon Me just lack conviction and that oddball charm he once had is scant. My Best Friend is an abomination/work of art depending on how much cheese you can handle, but even here Cuomo’s usually perfect fret-phrasing is lost in the solo; We Are All On Drugs is undeniably pathetic and its only saving grace is Patrick Wilson’s drumming, but he’s always brilliant so that’s kinda like saying, ‘Yeah, that track’s good, it’s got music in it.’ Perfect Situation and Haunt You Every Day are absolute diamonds, mind, but they’re found in a battleground of shit and a few nice-looking ferns.

BUY IT ON AMAZON

And here’s those electronic-inspired ones we were on about. Weezer’s eighth record is a weird one, and not just because of Lost’s Jorge Garcia on the cover; Cuomo’s brazen vocal delivery borders on annoying but the songs are, on the whole, pretty good. Sure, Smart Girls, Where’s My Sex? and the verses of Memories would benefit with Cuomo being bundled into a bag and replaced with, well, nothing, but some of Hurley’s tracks are so damn catchy. Ruling Me, in particular, rumbles like a bastardised Green Album number; the majority of Hurley’s bulk does this to lesser results. This is bullish, ridiculous power pop with Michael Cera playing mandolin through Hang On because… why not?

BUY IT ON AMAZON

Y’know when The Beatles took loads of drugs and started making really weird music but there were still poppy moments within because, y’know, they were The Beatles? That’s Weezer on the Red Album, minus the drugs and, well, The Beatles. Troublemaker and Pork And Beans fairly stick to the Weezer formula, but then you’ve got stuff like The Greatest Man That Ever Lived – a song that encompasses 10 musical movements within just under six minutes – and the heavenly, please-play-it-at-my-funeral closer The Angel And The One. Again, another Beatles comparison: every band member takes up lead vocals at some point. Okay, so Thought I Knew just isn’t very good, but that’s the only noticeable stinker; Everybody Get Dangerous is ridiculous in the best kind of way, Cuomo confidently spitting nonsense but not in the alien fashion he does on Hurley. So yeah. The Red Album is good.

An early run of on Pacific Daydream, titled Beach Boys, Feels Like Summer and Happy Hour gives you some idea of the escapist power-pop rush the album is aiming for – and achieves, thanks to soaring falsetto choruses and insistent, upbeat grooves. References to Stevie Ray Vaughan and Monty Python, meanwhile, add to the sense of a band shamelessly wallowing in nostalgia in the same irresistible way they did on their 2014 stomper Back To The Shack.

The breeze-block FM rock riffs on Mexican Fender almost sound like a parody, but they work just as well now as they did for The Cars, Cheap Trick or any of Weezer’s musical antecedents. But it’s the ever-present hint of neurosis in Rivers Cuomo’s voice and vaguely bi-polar lyrics (thankfully not produced using the cut-up technique he employed for last year’s self-titled release) that give this band their perennial edge of strangeness, and reaffirm Weezer’s unique place in rock fans’ affections.

Ditching the electro-driven racket of their past two records and hiring Ric Ocasek, the bloke who produced their first and third albums, Weezer set about crafting their comeback with Everything Will Be Alright In The End. And it worked. This is a more organic, scuzzed-up affair, Ain’t Got Nobody still retaining that honey-sweet, poppy charm but sounding like it’s come from someone’s garage with way too much homework just piling up. It’s mainly just short, snappy songs about rock music and girls; you’ve got your sunshine-drenched Cleopatra and Eulogy For A Rock Band, but then there’s the insanely ambitious Futurescope triptych at the end, ploughing through largely instrumental, guitar-led wasteland as everything from Queen to Iron Maiden is drawn upon, Weezer victoriously trotting through the warm-up lap to their long-awaited comeback. Everything was alright in the end.

Crafted with the help of Weezer’s fans via message boards, Maladroit is a weird one that doesn’t get anywhere near as much credit as it deserves. Admittedly it is a little jarring pressing play and hearing American Gigolo’s crunching heavy metal riff open up a Weezer album, but the same could be said about hearing Pinkerton straight after the Blue Album. Despite their unfair pigeonholing as ‘just a pop rock band’, Weezer’s fourth album proves that they can do even more stuff while still retaining that poppy trademark on stuff like Keep Fishin’. The tumultuous build and Cuomo’s spiteful words on Slob counteract the eventual payoff, almost harking back to Pinkerton in terms of its dark atmosphere. Possibilities is a track Weezer need to bring back into the live set just for those backing vocals alone but, to be honest, we’d be happy with Maladroit being played front to back. It’s an under-appreciated gem and due to its bizarre gestation period – demos were shared with fans online, fans gave feedback, thus influencing the record’s tracklisting – people are easy to dismiss it. Don’t fall into the trap – give Maladroit a go.

As suggested with Maladroit, Cuomo takes criticism to heart. He’s an artist but, like most people with a brain and little pretence, he does care what others think. So when Pinkerton got slagged off by pretty much everyone, Weezer’s mainman called time on the band for a while. When they finally returned, they hit back with a 10-song collection more in keeping with their debut’s sound; the Green Album is one of the 21st century’s finest examples of pop rock, condensed into 28 minutes and containing, as usual, some of the most memorable guitar solos of all time thanks to Cuomo – he’s basically Kirk Hammett with glasses and a jumper. Island In The Sun’s poppy perfection overshadows everything else on the Green Album, but the other nine are just as fabulous in their own lovely little ways. Knock-Down Drag-Out is a showcase for bassist Mikey Welsh, whose sole Weezer recordings come from this album; O Girlfriend is so bloody wet, but gloriously so, Cuomo’s solo bolstering it with a touch of awesome; the falsetto vocal and heavy chugging through the irresistible Hash Pipe is an early indicator of the band’s Maladroit tendencies and, more importantly, it’s an absolute tune.

It’s so good to have Weezer back. Not back like Everything Will Be Alright In The End, but actually back. Back to the peak of their powers, back on a form they haven’t been on since the turn of the millennium. Twenty-two years after their debut and Weezer only went and showed us all there’s life in the old dogs yet, returning to the 10-songs-and-the-truth format that made us all fall in love with them way back when. Cuomo’s solos shine brighter than the skin of sunbathing Californians and the band’s Beatles/Beach Boys/Pixies hybrid is so evidently clear on the White Album. For every King Of The World and Thank God For Girls, there’s Jacked Up and Summer Elaine and Drunk Dory – songs experimenting with melody and arrangements previously untouched by the band. Weezer are one of the greatest bands to ever do it and the White Album suggest that they’ve still got something else left for us. And that’s so exciting.

It’s just a one-way ticket to bangertown, innit? The world at large was introduced to Weezer through the Blue Album’s 10-song triumph; My Name Is Jonas, Say It Ain’t So, Surf Wax America…. You can’t mess with it. Cuomo’s vocals are untrained and that’s a beautiful thing, to have him harmonise with bassist Matt Sharp’s fleeting falsetto through Surf Wax America. Even the lengthy, jam-room approach to Only In Dreams works in the context of what is essentially a pop album, finishing everything off with an eight minute, garage band hack‘n’slash bout of brilliance. It’s yearning, happy, miserable, hopeful and more, all packed into this tiny blue box. Still, to this day, the Blue Album is a triumph and an example of how to properly do your debut album.

The Blue Album had Weezer pegged as college rock boys. Loveable nerds who sing about woolly jumpers, girlfriends and surfing. So when Pinkerton came two years later, the people at the record label weren’t too happy; this is self-loathing; this is pitiful; this is Cuomo and co reaching into the depths of their stomachs and pulling out all the fire they can, much to the chagrin of clueless higher-ups. No, this isn’t leaking positivity like the Blue Album. But it’s just as consistent, just as catchy and packed with unbridled emotion. After he pulls of that ludicrous guitar solo in Tired Of Sex, listen to Cuomo’s voice breaking. The choppy, angular riffs and boisterous bass underpinning The Good Life’s booty-shaking bellows. And don’t even get us started on Butterfly – that’s up there with the opening scenes to Up and chopping onions at a funeral. Heartbreaking. Pinkerton was born from Cuomo’s bewilderment and dissatisfaction with his life following the Blue Album; it’s about sexual frustration, incredible loneliness and warped fantasies, all the backdrop to melodically metallic pop songs. It’s emo before emo was a thing. At its heart, Pinkerton is Rivers Cuomo’s diary chronicling the two most drastic years of his life, from obscurity to stardom. We’re just lucky he could be bothered to write it all down for us.