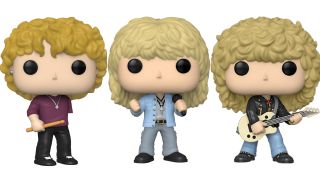 Toy manufacturer Funko have taken another plunge into the rock world by announcing that Def Leppard will be joining their ever-growing lineup.

There’s no firm release date yet, with the company simply saying that mini figures of Joe Elliott, Rick Allen, Rick Savage, Phil Collen and Vivian Campbell will be “coming soon.”

Check out a gallery of all five figures below.

Earlier this month, Def Leppard frontman Elliott reported that the band were preparing to release a live album which was recorded in Oxford in 1980 during the band’s tour in support of their debut album On Through The Night.

Meanwhile, Elliott’s side-project Down ’N’ Outz have just released their new album This Is How We Roll. He’s joined in the lineup by Quireboys' Paul Guerin, Guy Griffin and Keith Weir, plus Share Ross and Phil Martin.