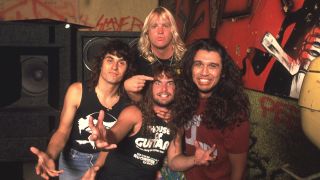 Before turning back the hands of time to Slayer’s first real tour of the UK, we must consider the backdrop to their visit. Back in 1987, thrash was barely out of its infancy. The ‘Big 4’ had already been crowned, but Metallica, Anthrax and Megadeth had released no more than three albums each, and though each band had toured the UK, commercial reward was still in the future. For the average rock fan, the jury remained out on a style of music that naysayers considered a flash in the pan – or just plain unmusical.

But there seemed something different about Slayer. They felt just a little more edgy than their rivals, and a bit less cartoonish. Were they really Devil-worshippers? No one knew for sure, and few dared to ask.

Although the Californians’ third full-length, the Rick Rubin-produced Reign In Blood, was their most complete statement so far, distributors of Def Jam Records (later Def American) declined to release it as its opening track, Angel Of Death, was inspired by the Auschwitz concentration camp butcher Josef Mengele. Slayer’s attitude was simple: Reign In Blood is art… if you don’t want to put it out, it’s your loss. They found another distributor. The controversy only heightened an increasing sense of notoriety, and little thought was given to the people branding them as Nazis. “If you’re afraid of words then you’re a fucking idiot,” reasoned guitarist Kerry King.

Slayer had played the UK just once before, promoting Hell Awaits; a sold-out show at London’s Marquee Club attended by metalheads, punks and assorted outcasts who spat on them as they performed. Reviewers did likewise, though only in print. In the summer of 1985, Slayer were considered a joke.

The 28 minutes and 58 seconds of unbridled ferocity known as Reign In Blood changed everything, and in ’87, over the Easter weekend – what perfect timing! – they returned to Britain for a handful of shows as part of their Reign In Pain European tour. For most of us, this was a first chance to experience Slayer in the crawling, decaying flesh.

Hammer was invited to spend a few days on the road with the band. On their first trip, the foursome had had to drive and navigate around the UK. Though their fortunes were on the rise this time, there was no luxury Nightliner tourbus, just a simple van fitted with bucket seats to accommodate the guys and a tour manager, Rick Sales. Besides yours truly and lensman Tony Mottram, there was an additional passenger. And her presence was controversial.

Dave Lombardo was Slayer’s not-so-secret weapon. His powerful, versatile drumming was the cornerstone of their sound. And yet in the early stages of the US leg of the Reign In Pain tour, he had quit, to be replaced by Tony ‘TJ’ Scaglione of Whiplash. When things didn’t work out as they’d hoped, Dave was asked – quite probably begged – to reconsider his decision. The answer was a tentative ‘yes’, but there were provisos. In stark contravention of one of the key rules of a touring rock band in the late 80s, Dave wanted his wife, Teresa, to accompany him as he worked. And being broke, Dave demanded his rent and utility bills should be paid for him. Reluctantly, especially on the former point, Slayer caved in.

On the tour things seemed a little tense. Dave and Teresa sat in the back of the bus, talking in low voices and gazing into one another’s eyes. Another part of the deal that triggered his return was that the Lombardos received their own dressing room wherever possible.

Though they mellowed a little as the years rolled by, Slayer have never been a band to gratefully welcome outsiders into their midst, and while you might have imagined they’d welcome the publicity of having Hammer on board, they seemed a little standoffish. When I asked Kerry why Dave was back (which, given his close proximity, now seems insensitive), he growled: “Because he wanted to play.”

So what happened to TJ Scaglione? “He just didn’t work out. He’s a great drummer but Dave’s family.”

And was Dave back in Slayer for good this time? “I’m not sure,” he hedged. “We’ll have to see.”

Bassist/vocalist Tom Araya sat in the front seat fooling around with his latest toy, a video camera, and as the miles towards Manchester ticked away, the van rocked to the sound of Electric by The Cult. Copies of Hammer were circulated and read in a companionable silence until Kerry reached the live reviews and shattered the peace with a roar of “MEGADETH SUCKS!” upon discovering a critique of Mustaine and co. at London’s Hammersmith Odeon. Two years earlier Kerry had, of course, joined Megadeth but lasted a mere five shows before returning to Slayer. The move would inspire one of many feuds to involve the outspoken guitarist.

Though their show at the Apollo was far from sold out, the van was greeted in Manchester by a sea of autograph-seeking fans. A soundcheck revealed Slayer’s old-school metal roots via ramshackle versions of Symptom Of The Universe by Black Sabbath, the Scorpions’ The Zoo and the Judas Priest classics Victim Of Changes, Heading Out To The Highway and Breaking The Law. But most interestingly of all, Dave remained in a private dressing room with his wife, while Kerry and fellow guitarist Jeff Hanneman played the drums.

The evening’s performance, which unsurprisingly featured most but not all of Reign In Blood (Piece By Piece being its sole omission), was among the finest metal gigs ever witnessed by this writer. Kerry and Jeff, who’d kept himself to himself on the journey, flayed the skin with their scintillating lead guitar runs and Dave’s rhythmic contribution was extraordinary, his blur of feet and sticks causing the now rather silly prediction: “Lars Ulrich had better watch his arse in the next set of readers’ polls.”

At the centre of it all was Tom. Earlier in the day the frontman had seemed quietly spoken and comparatively meek, but at the Apollo he evolved into a dark and genuinely frightening character. Introducing Necrophiliac, Tom’s face took on a gleeful grin while asking the Manchester crowd: “Are you guys into dead fucks?” There was a massive roar. “That’s OK, I’m into dead fucks too. You know what I like best about these little ladies that live six feet underground? Every time I eat them out I can hear the maggots crunching in my teeth.”

Given that Tom would later own up to Christian beliefs, such a statement was as shocking as the transformation that took place as he strode from the wings into the spotlight. Years later in another interview, he told me: “I’m a very laidback guy, that stage persona is just a part of me. It’s like a switch that goes on and off.”

Of course, these were early days for Slayer. Over the years Dave would come and go, exiting the band for the final time in 2013, but they got by without him and outlived every passing fad.

“Why would we try to be like Korn?” Kerry laughed when I interviewed him again in 2002. “Why would anybody who likes metal want to play that stuff? It fucking sucks.”

Tragically, Jeff Hanneman died in 2013, but Slayer recruited well, bringing in Exodus’ Gary Holt to find a way of continuing without dishonouring their fallen friend.

Few outside of their inner circle foresaw the band’s decision to retire. Though their final tour began in May 2018, they’re yet to fully explain the reasons why, declining all interview requests. Performances on the tour have been so incredible that they could still go on for several more years yet. However, Tom has experienced neck problems for decades as a result of his helicopter-esque headbanging, and in a recent interview Dave commented: “Tom’s been wanting to retire for a long time now. So now that he’s got it, I’m happy for him. I hope he gets what he wants out of life and his future.”

Having circuited the world on six previous legs, the end, which came on November 30 2019, at the Los Angeles Forum, was bittersweet for band and fans alike. Previously, in November ’18, following a show at Wembley, Tom struggled to leave the stage before uttering a final sigh of: “I’m gonna miss you guys.”

Their final show marked the saddest of farewells. Slayer, we're going to miss you, too.