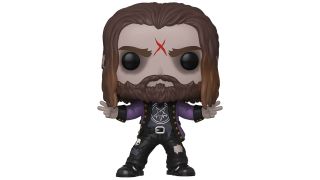 Kiss, Metallica, Guns N’ Roses, Jimi Hendrix, Lemmy, Ozzy Osbourne, Johnny Rotten, Dee Dee and Johnny Ramone, Babymetal, along with Kurt Cobain, Elton John and the Grateful Dead’s Jerry Garcia have all been immortalised in the range – and it’s set to get a bit more Zombie shaped later this year.

Yes, Rob Zombie is the latest addition to the lineup, with the news coming just weeks after a trailer was released for the musician and filmmaker’s latest flick 3 From Hell – the third and final part of his trilogy that began with House Of 1000 Corpses in 2001 and continued with the 2004 movie The Devil’s Rejects.

Zombie himself broke the news on Instagram, showing a picture of the model with the caption: “Guess who is now a Funko Pop!? Yep, this guy. Coming soon!"