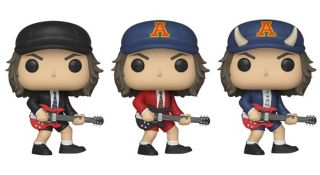 Metallica, Guns N’ Roses, Jimi Hendrix, Lemmy, Ozzy Osbourne, Kiss, Johnny Rotten, Dee Dee and Johnny Ramone, Babymetal, along with Kurt Cobain, Elton John and the Grateful Dead’s Jerry Garcia have all been immortalised in the range – and it’s set to get a bit heavier in January.

The company have announced that they’ll released three versions of AC/DC icon Angus Young in early 2019.

The first features the guitarist in his famous schoolboy uniform in black, while the second is a variation, with Young sporting a blue cap and a black guitar. The third shows Angus in blue, but the cap has sprouted horns as seen on the cover of AC/DC’s classic 1979 album Highway To Hell.

A statement on the Funko website reads: “If your favourite mode of transportation is the Highway To Hell, you’re in for a treat. Funko is ready to add some High Voltage rock‘n’roll to your collection with the release of its Angus Young Pop!.

“The AC/DC lead guitarist and co-founder is rocking on his guitar as officially licensed Pop! musician with a Chase figure that’s wearing a hat with an 'A' and devil horns, while an Angus Young Pop! with a red jacket is available as a FYE exclusive.”