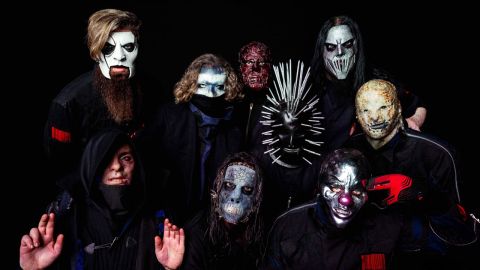 Slipknot – We Are Not Your Kind

Such is the reverence they've attained in the 20 years since their self-titled debut, there are very few events in our world as fanatically anticipated as a new Slipknot record.

Not that they always live up to the hype. Even the most dedicated maggot would struggle to defend 2008’s All Hope Is Gone or 2014’s .5: The Gray Chapter as enthusiastically as the band’s untouchable opening triumvirate, both being often great but occasionally forgetful.

Few metal acts manage to carry the same youthful vigour and savage intent that definied their initial success, but there’s always been the hope that Slipknot were impervious to the cruel hands of time. In a live setting, when the masks and boiler suits were donned, they still exhuded danger and excitement, but it was starting to diminish on record.

Thankfully not only have recent shows shown that the Iowans still leave destruction in their wake onstage, but the urgent singles, All Out Life and Unsainted, are welcome evidence that the band are more than capable of delivering a rabid clatter of percussion, fiendish riffs, demented scratches and stabs of electronics that still sounds unlike anything else.

The defiant proclamation of the former provided the album with a title, so it’s odd to see it omitted from the final cut, yet its maniacal bluster is evident throughout the album, with the nine members clearly finding plenty of fire and clawing at demons that need exorcising.

But while Red Flag is breathless from beginning to end, each of the album’s other seething blasts are an ominous trip into uncomfortable realms and include a massive vocal from one of, if not the, best singers in our game as shown by Unsainted’s undeniable hook.

Whether it’s when Nero Forte’s lumbering battering meets a creepily angelic chorus, or the militaristic beats and warped squall of effects that strafe Orphan, it seems there are plenty of new ways to tweak the established anthemic Slipknot formula.

As ever, different apparitions lurk behind every corner. Birth Of The Cruel sees a deformed monstrosity lurching and contorting itself out of the nu metal graveyard, the twisted lullaby of My Pain descends into a fog of dystopian synths, while the minimalist Spiders, with its eerie John Carpenter piano, gets more sinister with every listen.

But it’s the more mournful Liar’s Funeral and penultimate Not Long For This World that leave the biggest impact, with Corey Taylor at both his most vulnerable and assured over a tragic tapestry of unsettling synthetic atmosphere and huge cinematic peaks.

Solway Firth’s climactic presence builds through a melée of crashing drums and precision-engineered melodic riffs, and could well be the most dramatic conclusion to a Slipknot album so far.

While many will naturally but unfavourably compare it to the triumphs of yesteryear, We Are Not Your Kind, though far from flawless, can stand on its own merits, being both immediately arresting as well as having enough challenging depth to reveal new surprises with every listen.

Fierce, troubled, confrontational and more often than not bewildering, there’s still no one else like Slipknot.

Slipknot's new album We Are Not Your Kind is out on August 9 via Roadrunner Records. Pre-order here.