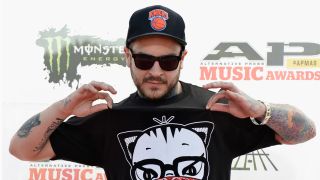 Official footage of Frankie Palmeri’s new Emmure lineup in action has been made available.

The group’s performance at the Trier, Germany, leg of the Imprecision Never Say Die tour on April 24 can be viewed below.

The frontman was left as the last man standing when the rest of Emmure left in December. He immediately said he was already working with other musicians and that they were recording the follow-up to sixth album Eternal Enemies.

Last month he confirmed bassist Phil Lockett, guitarist Josh Travis and drummer Josh Miller are his new colleagues in Emmure. Travis and Miller are both members of Glass Cloud, while Lockett and Travis are both former members of The Tony Danza Tapdance Extravaganza.

Emmure play shows in Manchester tonight (May 2) and London tomorrow as part of the Impericon tour.