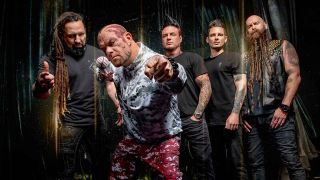 Five Finger Death Punch have announced the details of their eighth studio album, F8. The follow-up to 2018's And Justice For None will be released on February 28, and is available to pre-order now.

"We had an extremely successful, yet tumultuous couple of years as a band," says guitarist Zoltan Bathory, "We didn't just weather the storm but came out on the other side better than ever.

"It was a focused sober group recording, our most important album to date and without a question it shows. This album represents rebirth, progression, transcendence both personally and musically."

Vocalist Ivan Moody adds, “This record to me is ‘absolution’ – everything I’ve done in my life has led up to this moment."

The album will be available in CD, double gatefold vinyl and picture disc vinyl formats. The band also curated merchandise bundles of albums with exclusive T-shirts and Hoodies, which are available for pre-order now.

Back in September, Five Finger Death Punch teased their new single Inside Out, with Moody telling Metal Hammer that the track “pretty much encompasses everything” since his much-publicised addiction struggles.

He adds: “This is the first piece of music I’ve written since all this happened. So all these emotions, I finally get to put them out in a therapeutic way. It’s about alcoholism. It’s about my family leaving. It’s about my bandmates. It’s about looking at myself in the fucking face and saying, ‘Dude, you’re going to have to do this because nobody else is coming.’”

The full interview can be found in the brand new issue of Metal Hammer magazine which is on sale now. Also available is a Fiver Finger Death Punch Metal Hammer bundle, including a signed lyric sheet, exclusive back patch and more.

5FDP head out on a European tour in February with Megadeth and Bad Wolves – dates below. Tickets are on sale now.