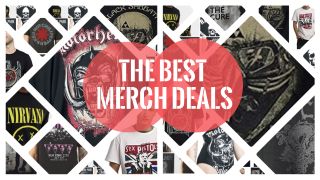 There was a time when you could only buy band merch at gigs or your nearest HMV or Virgin Megastore.

Those days are long gone. Now, everyone from Asos to Amazon, eBay to specialists like EMP sells official band merch and there are many bargains to be had – and maybe many come Amazon Prime Day.

We've scoured the web to find you the best deals on band tees and more (Motorhead swimming costume, anyone?)

LOOK! It's Eddie-from-Killers but like those Star Wars men you used to collect (er, you did stop collecting those, right?).

Doesn't matter! Eddie could fight Boba Fett. You could squeeze him your Millennium Falcon! He could fight Darth Maul, armed only with an axe! Oh, just buy it. Who wouldn't love this?View Deal

Official Classic Rock and Metal Hammer merch is now available for just £5! 33 classic designs have been discounted from an original price of £14.99 to a bargain-priced £5 to make way for new designs. T-shirts in the Black Friday sale include the classic mag logo designs, collectible Metal Hammer Golden Gods tees, and some of our favourite designs inspired by rock and metal classics: Born To Lose, Dino's Bar and Grill and Charlotte's nightclub. View Deal

Asos are one of many mainstream retailers that dips its toes into band merch. Right now they have Nirvana's classic 'smiley face' tee available in tall, plus and regular sizing and with a decent discount too. Students get an extra 20% off.View Deal

This girls' top is part of EMP's Motörhead Signature Collection. Looking a bit like a modified baseball top, it features a 'shark bite' cut that's longer at the sides. It's 35% off.View Deal

It's not going to be winter forever and now's your chance to snap up these Motorhead shorts at better than half price. Covered with Motorhead slogans ("Born to Raise Hell" on the pockets, Ace of Spades zip pulls etc), they're also just classic utility/cargo shorts.View Deal

This design first appeared as a sticker that came free with The Clash's Straight To Hell single, while the logo was used on second album Give 'Em Enough Rope. HMV has it onsale and they have their Pure Points scheme which means you earn points towards more saving while snapping up a bargain.View Deal

Worn by Tony Stark and by Mandy in this year's metal horror classic of the same name, the Never Say Die design appeared on the '78 US tour and has since become a classic Sabs tee. It's not discounted - it's just onsale via Amazon at a great price.View Deal

A limited edition US import worldwide exclusive to EMP,
this t-shirt based on designs from the 2014 Hunting Party Tour is in the EMP sale with 46% off.View Deal

A colourful collage of images from Pantera albums, this t-shirt is 29% off right now and has free delivery from Amazon.View Deal

What could be more rock than a bearded hairy skull? 40% off, that's what. Get it from EMP while stocks last.View Deal

With a front and back print - Warpig on the front, Ace of Spades on the back – this is a fun and collectible bit of merch that's off-season and 24% off as a result. See also their Amon Amarth swimsuit.View Deal

It's not band merch but this Dracula/Hammer tee is exactly the kind of thing you can imagine horror fans like Kirk Hammett or Slash wearing, and it's now half price.View Deal