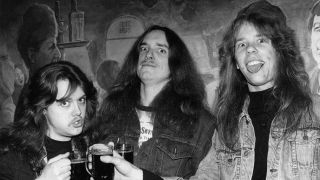 Metal Hammer writer Dom Lawson has been a diehard thrasher since he was a spotty teenager, so who better to make the greatest mixtape ever? He has plundered his record collection and created the ultimate old-school thrash compilation. Crank up our Spotify playlist and bang your head!

A ferocious statement of intent from the biggest of the Big Four, promising “the metallisation of your inner soul!” Metal up your ass, indeed.

Gleefully vicious insanity from Paul Baloff and the Bay Area kings. Quite possibly the most outrageously thrrrraaaaasssshh song ever recorded.

Overkill – Rotten To The Core

Still a staple of these New York veterans’ live sets nearly 30 years on, this is the sound of metal on steroids and cheap street speed. Fucking lethal.

Anthrax – Caught In A Mosh

An ageless classic from the rightfully revered Among The Living album. Thrash with furious singalong power and some of the greatest riffs ever written.

Testament – Into The Pit

Does exactly what it says on the thrash tin. If you want to know why Testament are many people’s favourite non-Big Four thrashers, listen to this. Loud.

A seething blast of flat-out thrashing skate-punk from the masters of the genre. Short, sharp, snotty and delivered at neck-wrecking velocity.

Proof that the British thrash scene had plenty to offer, Onslaught’s early records were dirtier, nastier and heavier than most. The title says it all.

Dark Angel – The Burning Of Sodom

The only band capable of challenging Slayer for the coveted “most vicious band in thrash” trophy, Dark Angel kicked opened the gates of hell with this gem.

Germany’s finest brought a new level of violence to thrash. The title track from their 1986 masterpiece is an ageless chunk of murderous mayhem.

Written by the late, great Jeff Hanneman, the opening track from the immortal Reign In Blood is simply the greatest thrash metal song ever recorded.

Blurring the lines between thrash and death metal, Possessed embraced the dark side of the force with alacrity. This creepy classic still slays three decades years on.

A whirlwind of chaotic riffs and heads-down aggression, Destruction gave neighbours Kreator a run for their money in the sonic savagery stakes.

Suicidal Tendencies – War Inside My Head

Raging thrash from a gang of skate-punk hoodlums from Venice Beach, Los Angeles, this legendary anthem marked a high point for the crossover scene.

Canada’s groundbreaking thrash scientists tore up the rulebook at will back in the 80s. If you like your metal inventive and weird, Voivod fit the bill.

The sheer intensity of Brazil’s undisputed thrash gods took the metal world by surprise. And 25 years later, Inner Self still slays like Saint George on a meth binge.

The scything riffs of Andy Sneap collided with the inspired lyrics of Martin Walkyier and British thrash suddenly had its own unique standard bearers.

Megadeth – Holy Wars… The Punishment Due

Obliterating all-comers with a jaw-droppingly audacious display of technical precision, Megadeth circa 1990 were unstoppable. This is epic thrash perfection.