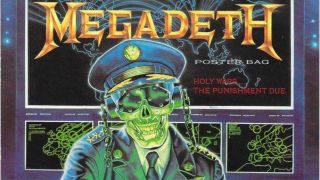 List Megadeth’s all-time greatest songs, and Holy Wars … The Punishment Due is guaranteed to be near the top. Taken from 1990’s iconic Rust In Peace album, it features a classic Dave Mustaine lyric about religious hatred and sectarianism, inspired by a real-life incident when a drunken Mustaine prompted a near-riot after inadvertently making a pro-IRA statement onstage at the Antrim Forum in Northern Ireland in 1988.

With Megadeth currently appearing on the cover of the brand new issue of Metal Hammer, Dave looks back on the explosive incident that led to an all time classic.

Dave Mustaine: “We’d been in Northern Ireland. I’d been drinking Guinness and somebody explained some complicated stuff to me in a simplified manner really quickly, and I bought it. I said something from the stage that I shouldn’t have and it caused a scuffle. [Bassist] David Ellefson wouldn’t talk to me the next day.

I said, ‘What’s wrong?’ and he said, ‘You don’t know what you said last night, do you?’ I said, ‘No, I was drunk, that’s the point.’ He told me what I’d said [Mustaine made an onstage dedication to ‘the cause’, a reference to the IRA] and that we were escorted out of town in a bulletproof bus. I was so disappointed I’d said that.

The next day we left Dublin for Nottingham Rock City and [drummer] Chuck Behler was nowhere to be found. [His drum tech] Nick Menza hopped up on the drumkit and I started playing the riff to Holy Wars… and wrote the lyrics soon after.

“My attitude to the lyrics hasn’t changed since then. It’s the same stuff, man. There are still religious wars, still people who don’t know such as I didn’t, still people who follow all this stuff and have no understanding of other people’s lives or their cultures, laws and shit like that.

"Just a couple of different things with liberties from one country to the next can mean freedom to express yourself or you get your head cut off. It’s important not to go into the world and expect things your way.”

“The song appeared on Guitar Hero years after it came out. I like that young guitar players are learning music on a bastardised version of guitar; it unlocks the world to non-musicians. I just want people to have a good time with it.”