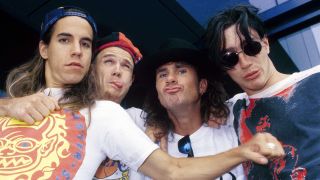 Sunny Los Angeles, where dreams are made and dreams are broken. La La Land. It’s a mad place, frankly, and it’s no wonder so many bands have written songs about it. To some it’s paradise, and to other it’s hell on earth; it rather depends on whether you live in Beverly Hills – where the rich and the famous are followed by paparazzi – or Compton, where the poor are followed by police.

The City Of Angels, which is actually made up of 88 cities, has spawned some of the best (and worst) rock ‘n’ roll on the planet, and culling our list down to just ten songs was no easy task. But while there are some glaring omissions like the Runaways’ Hollywood or Leftfield’s Open Up (’Burn Hollywood, burn!’), there can be no question that the following tunes tell the tale of LA, the city of fakes that doesn’t get any more real.

London has London Calling by the Clash and LA has this, the title track of X’s debut album of 1980. It’s kinda that simple. Go to any dive bar and you’ll hear it at least once. Ask any Angeleno to name a song about LA and this will be the first they come up with. Ironically, however, the song is actually about a racist woman leaving the place.

Nine years before the aforementioned racist left town we find The Doors welcoming a new arrival who “just got into town about an hour ago.” The title track of their third album, the last to feature vocalist Jim Morrison who died just three months later, it tells of wide-eyed wonder and loneliness, of “cops in cars” and “topless bars”, and to this day perfectly encapsulates the feeling of excitement and vulnerability that comes with a move to LA.

Another ditty concerning the fairer sex, White Guilt, otherwise known as LA Lady, is not exactly flattering, but nonetheless hits the bullseye with its portrayal of a jaded “train wreck” who has perhaps become fallen in the City Of Angels. ‘Wipe the blood running from your nose/Cause if the price is right then anything goes,’ sings Bronx frontman Matt Caughtran in this bitter masterpiece doubtless written from equally bitter experience.

If you had the good fortune not to have owned a radio in 2005 you may not be aware of this repetitive and massively annoying hit. It does, however, pretty much sum up the wealthy neighbourhood that inspired it. Overrated, vacuous, and largely unavoidable, it is the musical equivalent of Paris Hilton’s dog. To make matters worse, Weezer frontman Rivers Cuomo has stated that the song “wasn’t meant to be sarcastic at all”, but was “totally sincere”.

This Bad Religion tune from 2004 is apparently a metaphor for how the media likes to sensationalise everything. In which case its meaning was largely missed by LA residents at the time because large parts of Los Angeles were actually on fire. Indeed, when the song was written a wildfire had just consumed 280,000 acres of land, causing an estimated $27 million in damages, so forgive us for taking the song literally.

LOST IN HOLLYWOOD – SYSTEM OF A DOWN

Synonymous with glitz and glamour, the streets of Hollywood are in fact largely paved with dog shit and cigarette ends. “Those vicious streets are filled with strays,” warn System Of A Down on this moment of melancholy brilliance from their Mesmerize album of 2005, before adding, “You should have never gone to Hollywood.” Not surprisingly guitarist Daron Malakian, who wrote the song, had moved long ago.

Without doubt the most overplayed song in strip clubs around the world, but then, to be fair, Girls, Girls, Girls, does reference half a dozen such establishments, most of them littered around the Sunset Strip. Oh, and the title of the songs came from the sign outside Crazy Girls, which, as you might imagine, is another place where your change will come in single bills.

While the lyrics for Welcome To The Jungle were actually written in Seattle, the song was inspired by a homeless person walking the streets of LA (or New York, if you believe Wikipedia) who shouted to Axl Rose the immortal words, “You know where you are? You’re in the jungle, baby; you’re gonna die!” Either way, Mr Rose is still alive and well.

Top down, stereo blasting, this is pretty much the perfect tune for cruising the streets of LA on a hot summer day. Admittedly, you’ll be stuck in traffic that moves at the speed of smell, but at least you’ll be smiling until you have to find a parking space. At which point you probably won’t wanna be in LA.

Let’s face it, nearly all Chilli Peppers songs are either about LA or heroin. This one happens to be about both. Frontman Anthony Kiedis refuses to specify the location of the bridge in question, but apparently used to buy drugs there from gang members. Best avoided, then.

L.A. Woman And The Last Days Of Jim Morrison