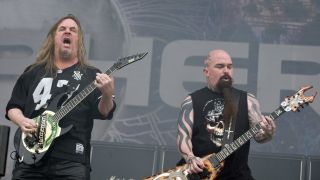 Slayer guitarist Jeff Hanneman – who died on 2 May, 2013, aged 49 – was one of the most influential heavy metal musicians of his generation. For the best part of 30 years Hanneman was Slayer’s principal songwriter. His song Angel Of Death, from the band’s landmark 1986 album Reign In Blood, defined Slayer’s entire career and sealed their reputation as the heaviest and most uncompromising band of the thrash metal era.

At the time of his death, a statement on the band’s website read: “Slayer is devastated to inform that their bandmate and brother, Jeff Hanneman, passed away at about 11am this morning near his Southern California home. Hanneman was in an area hospital when he suffered liver failure. He is survived by his wife Kathy, his sister Kathy and his brothers Michael and Larry, and will be sorely missed”.

Slayer formed in 1981 in Los Angeles, with Hanneman and Kerry King on guitars, Dave Lombardo on drums and Tom Araya on bass and vocals. Their key influences were classic metal bands: Black Sabbath, Judas Priest, Iron Maiden. But Hanneman was also a fan of hardcore punk, and this would be pivotal to Slayer’s development.

Combining the power of metal with the speed of punk, Slayer were pioneers of thrash metal alongside Metallica, Megadeth and Anthrax. But Slayer were always the most extreme band in the genre, and for Hanneman this was a badge of honour.

“We weren’t schooled musicians,” he said, “but we knew what sounded dark. If it sounds like I’m standing over a body that’s just been stabbed to death, then it’s perfect.”

When the band’s second album, Hell Awaits, was released in 1985, Classic Rock’s Geoff Barton [then writing for Kerrang!] proclaimed Slayer “the most threatening, subversive band on the planet”. On the follow-up, Reign In Blood, they pushed the envelope even further, with Angel Of Death creating a huge controversy and leading to a debate over art versus censorship. Hanneman wrote the song after reading various books about Josef Mengele, the most infamous of all Nazi war criminals, named the Angel Of Death by inmates at the concentration camp Auschwitz-Birkenau.

The subject matter was so sensitive that Columbia Records, distributor for Slayer’s label Def Jam, refused to release the album. In the end it forced Rick Rubin – the producer of Reign In Blood and co-head of Def Jam – to find new distributors. But Hanneman never felt the need to apologise for Angel Of Death.

“It’s just like a TV documentary,” he said. “I figured people got upset because the lyrics didn’t say Mengele was an evil sonofabitch. But so what?”

Angel Of Death was also, on a musical level, Slayer’s defining statement and Jeff Hanneman’s masterpiece, his brilliance as an arranger illustrated by the song’s sudden shift from breakneck speed to a slow, grinding riff. And on an album that is widely acclaimed as the pinnacle of thrash metal, it was another Hanneman classic that provided its devastating finale – Raining Blood.

He would go on to write many of the key songs in the Slayer catalogue, including South Of Heaven, War Ensemble, Seasons In The Abyss and World Painted Blood. His death leaves the future of the band in doubt. During the last few years Slayer toured with Gary Holt of Exodus, then Pat O’Brien of Cannibal Corpse standing in for Hanneman, but it was always hoped he would recover and rejoin the band.

Slayer’s future is further complicated by the recent exit of Dave Lombardo in a dispute that remains unresolved. The only certainty is that without Hanneman’s writing, and his near-telepathic understanding with Kerry King, Slayer will never sound the same again.

The last time I spoke to Hanneman, in 2009, he explained that Angel Of Death was written in a most unlikely setting – at the home of his girlfriend’s parents. He laughed about the bizarre nature of his creative process. “It’s weird. When I’m angry, the music doesn’t flow. But when I’m happy the evil comes out!”

Our first meeting, in LA in 1988 for a Sounds cover story, was memorable for what happened after I had interviewed Jeff with Kerry King and Tom Araya. We rode back to my hotel in Jeff’s car, with Black Sabbath’s Fairies Wear Boots blasting out of the stereo and all four of us headbanging like the famous Bohemian Rhapsody scene in Wayne’s World. This is how Jeff Hanneman should be remembered: not only as a key figure in one of the greatest of all heavy metal bands, but also as a fan of the music to which he dedicated so many years of his life.

This was first published in Classic Rock issue 185.