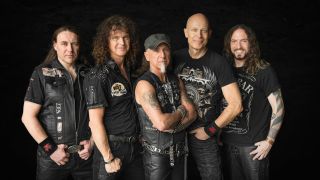 I’ve always been into the classic metal approach. And that’s where Accept belong.

The first time I came across them was at the end of 1982, when guitarist Wolf Hoffmann was on the cover of Kerrang!. I was well into Flying Vs, and there he was on the cover straddling railway tracks holding a white Flying V.

I really heard them for the first time on BBC Radio 1’s iconic Friday Rock Show, and I loved their straight-ahead metal style. To me, they are one of the great metal bands, and I’m proud to have produced their last three studio albums, Blood Of The Nations (2010), Stalingrad (2012) and Blind Rage (2014).

Here then, are their best 10 tracks…

STARLIGHT (Breaker, 1981) The album’s opening track. It might be the first thing I ever heard by the band on The Friday Rock Show, and it’s what hooked me, making me want to hear more. This had such a strong guitar sound, and I feel the entire album was better produced than the more celebrated Restless And Wild album.

BREAKER (Breaker, 1981) The title song of that 1981 album. What I love about it is that the band could come up with a lyric like ‘icicle brains/bicycle chains’, and it works! This makes no sense, but who cares? I found out much later that what the band did in those days was write lyrics down, and then use a dictionary to see if they made sense. That was back when their English wasn’t very good. But this one obviously slipped through. I’m glad it did, because it’s part of the song’s enduring charm.

FAST AS A SHARK (Restless And Wild, 1982) The opening song on this 1982 album, and for me, this is a forerunner of the whole thrash movement. It’s such a pioneering track. What you might not know is that the opening ‘hi de hi’ bit actually features producer Dieter Dierks on vocals, recorded when he was a kid! It’s an old German children’s tune called A Farthing And A Penny; the band found it by accident and thought it would be funny to use it. And they say Germans have no sense of humour!

PRINCESS OF THE DAWN (Restless And Wild, 1982) I’ve ripped this guitar solo off a lot over the years. The song is really built around one riff that builds and builds right up to the chorus. It’s simple, but brilliant.

BALLS TO THE WALL (Balls To The Wall, 1983) This is probably the band’s biggest anthem and most memorable song. I had the pleasure of playing it live with them onstage in London not that long ago. What a thrill to be able to go on and be part of such a metal classic. This just sticks in your mind. It’s Accept at their best.

LONDON LEATHERBOYS (Balls To The Wall, 1983) Terrible title, but what a song. Yes, I know it’s really a rewrite of The Killing Machine from Judas Priest, but Udo Dirkschneider’s vocals are great. He’s probably in his prime on this song and also on the rest of this album. And that really makes London Leatherboys so timeless.

METAL HEART (Metal Heart, 1985) It marks the first time Wolf Hoffmann had incorporated classical influences into his guitar style. He’d always had elements from Ritchie Blackmore about him, but you can clearly hear Beethoven in the middle. Wolf had actually played a lot of this guitar part when Accept played at the Monsters Of Rock festival in 1984, yet what you hear on Metal Heart is magical.

UP TO THE LIMIT (Metal Heart, 1985) Another one from the Metal Heart album. What I like about it is the way in which the band balance a commercial melody against something rather hard and edgy. It’s the sort of thing with which the Scorpions made their reputation, and Accept do it so well, without sounding like they were following in their fellow Germans’ footsteps.

TEUTONIC TERROR (Blood Of The Nations, 2010) This was the first song I worked on with them, so it means a lot to me. From the start here, I knew the band really had captured what they had always been about. It wasn’t about returning to their roots, but taking what had gone before and building something for the future.

DARK SIDE OF MY HEART (Blind Rage, 2014) This is where Accept scored heavily by doing what they do best. You can hear the obvious commercial tones, yet it’s not a case of the band going mainstream, because it’s all done within a very heavy framework. It certainly reminds you of what they did on Metal Heart, and that’s what people have always loved about Accept. Dark Side Of My Heart is the band showing they’ve lost none of their passion and individuality.

For more information on Accept, visit their official website.