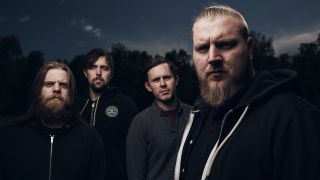 Even if you’ve never listened to the band themselves, you might remember Abhorrent Decimation from their CD mix-up with everyone’s favourite ostrich botherer Bernie Clifton last year. Those of you who are fans of the London band however will be acutely aware of the four-piece’s brutal death metal influences, often stemming from the gnarliest corners of the United States scene. But which albums in particular had a major impact on the band? We asked frontman Ashley Scott to choose his all-time top ten death metal albums.

“This is such a full-on record – a real facemelter. The wind-millers choice. This was the first Aborted record I heard and The Saw And The Carnage Done is still one of my favourite death metal tracks to date. That track showcased exactly what I loved about Aborted and heavy music at the time.”

Beneath The Massacre – Mechanics of Dysfunction

“This band and record is so special to me, the vocalist was such a huge inspiration at the time this record dropped. I love the sound of his voice, the no nonsense approach to delivery and the pitch of his vocals. He never really deviates from that savage low tone and I love that. They balanced technicality and tough-as-balls breakdowns perfectly.”

“Kill is a death metal masterclass delivered by the greatest death metal band of all time. When that first vocal comes in, oh man! Everything is so solid on this record. There’s no filler – every song is a heavyweight looking to spark you out. George Fisher is my favourite death metal vocalist and I think he absolutely steals the show on Kill.”

Decide – Once Upon The Cross

“Not long ago, I went back and listened to a lot of the older classic death metal records. Once Upon The Cross still stands head and shoulders above most of the older ilk – it’s the sheer energy and the frantic nature of it all. The production is great even by today’s standards and I will always love extreme music that knows how to deliver a chorus. I am a sucker for a catchy chorus and Colonel Benton leads the way on this record.”

“In the dictionary, under the word ‘Solid’ it just says ‘Nick Barker’. Most likely because of the dench performance he laid out on this record. Aside from the drumming, it’s a real masterclass in theatrical, symphonic-laced majesty. It’s been the soundtrack to so many road-trips with friends. If you’ve not heard this and fancy something a little fruity, crack it on.”

Hate Eternal – King Of All Kings

“I was late to the party with this – I think I heard it around 2007. There was something so rough and dirty about it all, which was really appealing to me. The record gives off a constant raw, unnerving feeling the entire time. Servants Of The Gods, Beyond Redemption and Chants In Declaration I recall being super riffy tunes.”

“One of death metal’s best kept secrets. It’s a hard act balancing brutality and memorable melody, and I have never heard a finer example than on this record. It’s so infectious and ridiculously memorable. You can whistle most of the riffs for fuck sake, it’s that full of melody. Super riffy!”

“Death, thrash, progressive, avant-garde, extreme… whatever. This band pioneered a genre, creating music that was so original. I hadn’t heard anything like it and it really left its mark on me as a musician and music lover. It pushed me to strive for a more sophisticated musicality to what I was writing and listening to.”

Nile – Annihilation Of The Wicked

“Huge riffs! Nile are such an unusual band to me, though. Because – bear with me – I find some of the vocals on this album almost comical, but they totally work in the mix and with the whole vibe. Everything sounds so vast and epic. I love all the interludes and the whole flow of this record. Lashed To The Slave Stick is just jaw-droppingly good.”

“Glen Benton and Dave Suzuki, what a tag-team! Christ on a bike! This album is relentless – a great concept delivered so powerfully. I love everything about this record, but especially the lyrics, song titles and vocal performances. They exhaust every decent riff perfectly and I really wish they could capture the magic of this release on a new record. Who knows…”

Abhorrent Decimation’s new album The Pardoner is released July 28 via Prosthetic Records, and is available to pre-order now. Watch the video for their new song Conspire below.