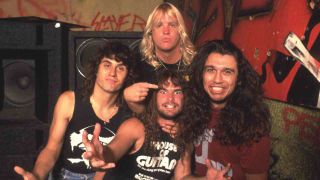 Slayer may be no more but their legacy stands among metal’s greatest. For much of their career, their sheer ferocity took metal to new levels of extremity - not least during the immortal run of albums they put together between 1983’s Show No Mercy and 1990’s Seasons In The Abyss. Here's our pick of the best Slayer songs from that glorious first decade.

Recorded for Brian Slagel’s Metal Massacre series of compilation albums, Aggressive Perfector – released on volume three, in 1983 – is notable for being the first occasion on which Slayer appeared on vinyl. More notable, and more impressive, is the better-known version of the track, recorded in 1986 with Rick Rubin for the Reign In Blood sessions, and which can be found as a bonus track on the CD version of that album. Aggressive Perfector pointed to the future, and the future was fast.

Kerry King maintains that one of the fundamental aspects of the acclaim received by Reign In Blood was the fact that producer Rick Rubin convinced the group to strip away the thick layer of reverb that lay atop the band’s earlier work.. But while the production values of Hell Awaits, the title track from Slayer’s second album, make this otherwise-resolute air-shifter appear as dated as a Sony Walkman – a superior version can be found on the band’s live album Decade Of Aggression – the purpose and velocity with which the group tear through the gears is evidence of a union not only beginning to find its feet, but also its purpose.

It took Slayer just a dozen words to secure the title of Authors of Metal’s Most Controversial Song. With vowels flying forth like gravel in a hurricane, Tom Araya’s proclamation of “Auschwitz, the meaning of pain, the way that I want you to die” took the Day-Glo pantomime gore of his group’s earlier work and painted it matt black. Whether it’s really in order for a metal group to be wading waist deep in the blood of the Holocaust is a question that was posed at the time – the answer, by the way, is surely not, at least not in this manner – with record-company furor delaying the UK release of Reign In Blood, Angel’s Of Death’s parent album, by almost six months.

When asked to nominate a super-power he would most like to possess, Kerry King answered that he wished for the ability to be able to set churches on fire simply by walking past them. With its lyric written solely by King, Jesus Saves is the first Slayer song to address the guitarist’s quite fundamental loathing of Christianity. In this, the track is fuelled not by the group’s usual sensibilities – namely, unpleasantness and horror – but by distaste and contempt. On an album that is sometimes clumsy in its lust to shock, Jesus Saves’ denouement of “no words of praise - no Promised Land to take you to, there is no other way” is a masterstroke of ruthless lyrical efficiency.

It may seem ridiculous to say this of a band who spend much of their time playing at speeds equal to a rollercoaster designed by a Formula One team, but when they put their minds to it Slayer are able to access a quality rare in the field of very heavy metal: groove. Nowhere in the group’s catalogue is this better expressed than in Postmortem. And while it only takes Reign In Blood’s penultimate track just two minutes and nine seconds to swerve from its murderous swing into a more frenetic gear – like all the album’s tracks, this one ends at a terrifying pace – Postmortem remains a beacon of murderous intent.

While Kerry King has long been Slayer’s one iconic member, when it comes to the songs it was Jeff Hanneman who supplied the group with its most innovative thrusts. With music written by the late guitarist, Reign In Blood’s not-quite-title track provides a master class in how to write a song without adhering to a single convention of songwriting structure. A thing of dark beauty, Raining Blood comprises six separates sections – the final one of which is a hurricane of off-white noise – and makes its point with severe stabbing motions in well under five minutes. Not so much a mini-rock opera as a compact and bijou slasher flick.

South Of Heaven enjoys the distinction of being the first Slayer song to be enjoyed by people who believed they didn’t like Slayer. Following the unbridled breakneck fury of Reign In Blood, the band were faced with a choice: repeat their tricks with diminishing returns, or adapt to the change that was forcing itself upon them. While much of its parent album can be described as a noble failure, South Of Heaven itself remains a fine example of a band escaping the corners into which they have painted themselves. By now a metal classic, nonetheless the track is still reassuringly unpleasant, as evinced in the line “bastard sons begat your cunting daughters.”

The fact that War Ensemble was beloved of a number of American service men and women during the Gulf War of 1991 suggests that Slayer’s imaginary notions of human conflict found harmony with the real thing (and, yes, this is the first and only occasion that the words ‘harmony’ and ‘Slayer’ have been paired together in the same sentence). Listening to the opening track from 1990’s Seasons In The Abyss set, this is hardly a surprise. As intense and unrelenting as the music may be, War Ensemble’s most fascinating aspect is its amoral inversion of George Orwell’s observation that sport is war without the killing. In Slayer’s world, war is sport – with plenty of killing.

Following a two-album hiatus, Seasons In The Abyss saw Slayer once again utilise Tom Araya’s services as a lyricist, and to good effect. Hallowed Point is a fine song, a somewhat forgotten Slayer gem that rattles along at a thrilling clip, but it is Araya and Hanneman’s darkly comic lyric in this ode to gun violence that really quickens the pulse. Needless to say, here the narrator is neither for nor against those who bear arms; the concern is merely with the carnage. This is a scene of “riddled convulsions, confetti of flesh” all “scattered helplessly”, where the release of a bullet will “snap the tongue in groove discharge to make my hallowed point.” As a paean to the awful finality of America’s Second Amendment, the lyric is hard to beat.

It might be difficult to picture Kerry King in the guise of a poet, but on Seasons In The Abyss’s short, sharp and shocking Born Of Fire he comes close to attaining the title of the Bard of Baldness. “All things dead must rise again when twilight’s blanket falls,” comes the image, barked forth with typical melodic economy by Tom Araya, prior to a description of the narrator – who is Satan, probably obviously – declaring that his digs are in a neighbourhood of “splattered red [where] you’ll find my den, blood dripping from the walls.” Either this place is Hell, or else Lucifer has moved to Deptford. It matters not, though, as Born Of Fire is Slayer’s most convincing portrait of Biblical dystopia.