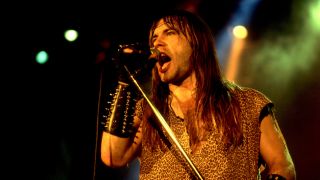 Hurrah, it’s St George’s Day! We’ve all painted our faces with the Cross Of St George – the flag we nicked from Genoa for wily commercial expedience – in honour of the Israeli-born Roman soldier who almost certainly never really slew a dragon. All this venerating largely fictional martyrs business might seem a bit silly, but it’s a good excuse for a noble top ten of patriotic metal classics.

Despite being proud Englishmen, Iron Maiden seldom go in for overt lyrical patriotism, but Bruce perfected the form in majestic style with his interpretation of William Blake’s stirring poem, England’s unofficial national anthem. With a profoundly charged, epic and windswept arrangement, Bruce makes the piece even more emotively redolent of “England’s green and pleasant land” with the addition of the phrase “Let it rain”.

Lots of British bands were looking to the USA for inspiration and success in 1984 – Saxon were Sailing To America, even Sunderland scruffbags Battleaxe were desperate to Make It In America – so it’s jolly decent of New York metal gods Manowar to return the compliment. This emotional singalong was a thank you to the first country to fully embrace Manowar’s epic power metal, which must have surprised the Germans.

Saxon’s 2004 classic Lionheart saw the Barnsley Big Teasers reconnecting with the English historical milieu that inspired their name, with rollicking odes to King Richard I, Suffolk witchfinder Matthew Hopkins and, on this sturdy nautical corker, the mighty Royal Navy warships of the 17th century. Might it even be an oblique, subconscious response to Manowar’s Hail To England?

Officially Suffolk’s greatest icon, Dani Filth scrawls this battered cod-Shakespearean verse of longing from the perspective of the homesick Englishman abroad: “I yearn to return to woodland ferns where Herne and his wild huntress lay,” Dani opines, concluding with a plea for national renewal: “This is a waking for England from its reticent doze… Lest hope and glory be regarded as foes.”

Unjustly accused of insalubrious right wing views due to the troublesome clash of historical national pride with modern political sensitivities, these Mancunian pagan saviours closed their 2008 debut with this densely wrought rallying cry based on the odes A Rhyme For Englishmen and The Anglo-Saxon Race by the forgotten 19th century English poet Martin Farquhar Tupper.

Edguy penned perhaps the most moving – and hilarious – tribute to Merrie England by a foreign band, these wacky Jerries archly trumpeting their fondness for “afternoon tea and Bob Catley and Mr Bean,” but our greatest artistic achievement is made clear:

“England’s got Steve Harris And as if that was not enough for you: England’s got Bruce Dickinson And on top of it the other ones In Iron Maiden too.”

Heinously obscure even by the musty standards of the New Wave Of British Heavy Metal, this eight-minute 1981 A-side from the sole release by this mysterious Bolton quartet was an artful Floydian text setting of the poem Of Old Sat Freedom On The Heights by Victorian poet laureate Alfred Lord Tennyson. Musically it’s arcane, ethereal and doomy lo-fi mellow prog with a set of subtle rousing melodies.

A school choir singing Jerusalem is rudely interrupted by this sprightly Quo-meets-Springsteen pub rock singalong by underrated Brummie NWOBHM survivors Demon. Despite the definitively occult band name, this is an unashamedly sentimental love song to all that’s best in English popular culture: “Dear Bobby Charlton, the Rockers and the Mods, Blackpool and its Tower, Morecambe and the Wise, Sir Lawrence Olivier…”.

Forefather – Proud To Be Proud

The eccentric Surrey-based brothers – known only as Athelstan and Wulfstan – are the unsung progenitors of what was briefly termed ‘English heritage black metal’, although they prefer the term ‘Anglo-Saxon metal’. Whatever you call it, this jagged blast of chest-beating heathen heroism stiffly salutes the great warriors of England’s distant tribal past like Hereward, Hengist and cake-scorching legend Alfred The Great.

Skyclad – Think Back And Lie Of England

Trust Skyclad’s punning literary frontman Martin Walkyier to nail such a vituperative parody of the patriotic song with venom and panache (and give it such a brilliantly arch title). Railing against the iniquities of our island’s brutal heritage over a pumping, pointed chorus, this dark anthem neatly exemplifies Skyclad’s innovative alchemical fusion of folk and metal; you’re not sure whether to dance a jig or bang your head.