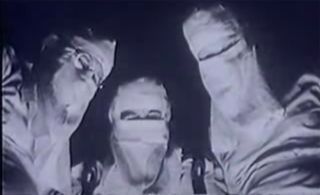 In 1988, Metallica unveiled their most ambitious and successful musical experiment yet. Released as the third and final single from fourth album …And Justice For All, One was the most deeply affecting song the band had recorded to date. The macabre story of an infantryman who steps on a landmine and wakes to gradually discover he has lost everything – his arms and legs, his five senses – except his mind, which is now cast adrift, trapped in its own grim and impossible reality, One was both nightmare writ large and musically transcendent journey, a thrash metal Tommy in miniature. The protagonist’s descent into living hell, wordlessly begging for death – capable of being seen both as existential metaphor for the human condition and the solipsism of the rock star life – its frantic climax also served up a state of inarticulate teenage angst like no other rock song before or since.

Partially based on the 1939 Dalton Trumbo novel, Johnny Got His Gun, One had started as a song James Hetfield had dreamt up, based on the notion of “just being a brain and nothing else,” before Cliff Burnstein suggested he read Trumbo’s book. The story of Joe Bonham, a good-looking, all-American boy encouraged to fight in World War I by his patriotic father, Bonham loses his legs, eyes, ears, mouth and nose to a German shell. After coming to terms with his gruesome circumstances in hospital while surrounded by frankly horrified doctors and nurses, Bonham uses the only part of his physical being he is still able to control – his head – to tap out a message in Morse code: ‘Please kill me’. “James got a lot of input from that,” said drummer and co-writer Lars Ulrich.

Its creation was also based on an important change the band had made to their strategy ahead of recording …Justice: unlike Master Of Puppets, there was to be at least one recognisable single and – even more significantly – video on the next album. Despite their public posturing, ‘refusing’ to release singles, both James and Lars had come around to the idea of a regular Metallica single and video since the unexpected success that year of Garage Days and, in particular, the homemade Cliff ’Em All video.

That One might lend itself well for some sort of visual interpretation that would complement the music in an arresting, artistic way, was obvious from the start. They became even more excited by the idea when it emerged that Trumbo – a left-wing, pro-peace screenwriter hounded out of Hollywood during the McCarthy-era witch hunts of the fifties – had actually directed a film version of the book, released in 1971 at the height of the Vietnam War. Might they be able to utilise scenes from it for a possible future video?

According to Rasmussen, they had actually bought the rights to the movie “in order to use it in the video” before they had even begun recording with him. “It was not much of a movie but they liked the look of it and thought it would look great in a video.” They also utilised some of the special effects on the original soundtrack, layering the sound of machine gun fire and exploding landmines over the intro to the track.

Thanks to the video, the song quickly gained the most exposure of any Metallica song to date – and it was even predicted that the stuffed shirts behind the Grammy Awards would award Lars, James et al a gong in ’89 for the Justice… album. However, this was not to be: despite playing One at that year’s awards ceremony and putting on their best suits for the occasion, Metallica were snubbed – the board opting in their infinite wisdom to give the Grammy (the first for Best Hard Rock/Metal Performance) to the decidedly un-metal, un-hard rock band Jethro Tull. The veteran folk-rockers received the award for their Crest Of A Knave album, a record which featured synthesisers and a drum machine. Yes, that heavy.

Despite this setback, the die had been cast – and the message had been delivered to the fans that the record industry was taking Metallica seriously at last. And One did eventually go on to scoop its own Grammy – Metallica’s very first – in 1990.

As Stairway To Heaven became for Led Zeppelin, One for Metallica represented the band at its musical apotheosis, containing all that was great and original about them in one long, incident-filled journey. From its quietly lush, heartrendingly melodic guitar intro to its steadily building mid-section, up to its volcanic, lights-out climax, its lyrics came straight to the terrifying point: ‘Hold my breath as I wish for death… Now the world is gone/I’m just one…’

This was not the standard rock stance of a Van Halen or Mötley Crüe, or even a Guns N’ Roses. This was revelation, a song utterly removed from its time, and its unforeseen side-effect was to alter the circumstances surrounding Metallica forever. You didn’t have to be a Metallica fan to appreciate the artistry of One, anymore than you have to be a Zeppelin fan to adore Stairway. But if you were, it was a milestone moment, one the band would arguably never equal.

Metallica - ...And Justice For All Deluxe Box Set
Metallica will release their highly anticipated reissue of their classic 1988 album in November. It'll feature a remix of the record, along with demos, mixes, live material and more.View Deal