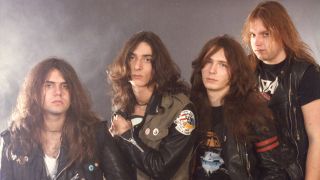 Teutonic thrash legends Kreator have been causing chaos and spreading their extreme aggression across the world for almost 40 years. From their 1985 debut Endless Pain to 2017's Gods Of Violence, frontman Mille Petrozza has remained a constant, directing the German wrecking crew into battle. And to celebrate the early years of Kreator, BMG have reissued the Noise era albums fully remastered and with bonus tracks!

And this gave us an idea.

To revisit not just the Noise years, but the entire back catalogue of Kreator, we asked Mille to pick his all-time favourite songs! Not an easy task, but if anyone can do it, it’s the general!

“I really like the groove and the lyrics to this one – it kind of sums up the attitude of the band quite well. I wrote this one in 2000 at my house in Essen, I remember it was one of these late-night inspirations. My girlfriend at the time fell asleep, I picked up my guitar and the song just came to me.”

“My good friend the singer Dagobert from Switzerland told me about the idea he had the for a song named Satan Is Real – I thought the title was kinda cliché at first, but the more I thought about it, the more a cool story based on the title came to mind. I had some riffs on my iPhone and we went to our friend Markus Ganther’s studio and demoed the song. The lyrics came easy and I think this one is one of the best Kreator songs ever.”

“I was imagining a medieval scenario of the black death. The structure comes across as more epic and it was the first seven-minute song by Kreator. I still love the orchestral, classic arrangement of this one. The lyrics were inspired by the Roger Corman movie The Masque Of The Red Death.”

“A lot of bands were writing about serial killers at the time I wrote this song. I wanted to invent my own serial killer, so the song is about this guy that kills people on cocaine. He’s a modern day sociopath that feels misunderstood and cast out. The opening riff was inspired by the band Batmobile.”

From Flood Into Fire

“This is a song about friendship and loyalty. I like the way it builds up to the chorus – the beat was inspired by another Kreator song called Servant In Heaven - King In Hell. The middle part is quite cool; going from full thrash into a ballad-esque spoken word. The lyrics mean a lot to me.”

“It is sometimes harder to write a three-chord simple song than it is to come up with a complex arrangement. Phobia is taken from our album Outcast – one of our Dogma albums. The guideline on this one was simple structures and not many guitar solos. The lyrics deal with a certain paranoia caused by smoking weed.”

“I am always on the hunt for strong song titles that no-one has thought of before. I remember I wanted to write a song about a spiritual, ghostlike world where evil lives, waiting to possess all human minds. My first idea for the title was Phantom Paradise, but as the lyrics evolved, I changed the tile.”

“I love songs that take you on a journey. When I was younger I was reading lots of books about near-death experiences, so I tried to put myself into the position of someone that has been to the other side and back. I was trying to reflect on the frustration the person feels as he tries to explain to his friends that they don’t need to be afraid of dying, as no-one believes in what he has seen. Our society has lost its sense for spirituality, which I think is a huge step backwards. Technology and facts don’t reflect the whole picture.”

“This song talks about living in a world without unity – people are being separated by religion and borders as chaos is breaking out. The line ‘Everyone against everyone’ is a translation of a quote from a German punk band called Slime.”

“Under the impression of September 11, 2001, I wrote this song in 2002 and it ended up becoming the title track to our 2005 album. The lyrics are obviously about terrorism. This is one of the strongest Kreator tracks ever.”