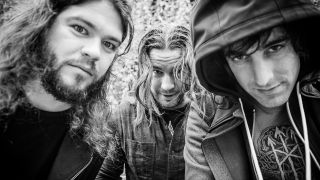 Ben Koller is a legend of heavy music. Not only is he the drummer for seminal noisemakers Converge, but he’s also responsible for All Pigs Must Die, Killer Be Killed and Mutoid Man, the latter of which are releasing their new album War Moans on June 2.

As you’d expect from a Ben Koller project, it’s hard-hitting, erratic and dripping with old school hardcore influences from Boston, New York and beyond. But which hardcore records does he think think belong at the top of the pile? Well, we caught up with the man himself to find out…

“I wore out this VHS tape until it was unplayable. They had such ferocious live energy. The riffs were angry as hell but the songs were so catchy and memorable. The first band I was in covered I Don’t Wanna Hear It and Filler. Fun stuff.”

“This was a compilation but it’s the first Black Flag CD I got my hands on. I was completely blown away by the chainsaw throat vocals and grimy guitar tone. I burned many hours after school playing along with that kick drum pattern at the beginning of Six Pack.”

Integrity – Humanity Is The Devil

“This album still has some of the most crushing riffs I have ever heard. Systems Overload was the first Integrity song I heard, but this EP really takes the cake for me. Vocal Test into Hollow and Abraxas Annihilation still make me want to party like I’m at the (Boston dive bar) Chopping Block in Mission Hill.”

Deadguy – Fixation On A Coworker

“Tim Singer had some of my all-time favourite pissed-off hardcore vocals on this album. I still use this record to get pumped up before a show. Pins And Needles is basically the movie Falling Down in the form of a hardcore song.”

Sick Of It All – Scratch the Surface

“I know this is their ‘major label sellout’ record or whatever, but I still love it. Great production, catchy choruses and my first taste of New York hardcore.”

“The riffs are heavy and crushing on this album, but what stands out for me is that it’s actually fun too. How can you not mosh when you hear those stick clicks into We Gotta Know?”

“Converge have been lucky enough to play a lot of shows with Hatebreed over the years. I loved their major label record, but this one was a little more raw and pissed off. The song Doomsayer has one of my favourite savage breakdown riffs at the end.”

“The wild, crusty hardcore power of this band is undeniable to me. I have great memories of spinning this one on vinyl over and over again when I was first getting into the DIY punk/hardcore scene. Plus the patch looked really cool.”

“A brutal compilation of fast, short, pissed-off hardcore bangers. Definitely not the most talent-rich bunch of songs but a really cool look at a bunch of outstanding early Boston Hardcore bands.”

His Hero Is Gone – Monuments To Thieves

“This band was really intriguing to me because they were mysterious and dark. The vocals and crustiness actually scared me a little bit. There’s some great songwriting going on here, and you can’t deny the drum riffs on this album!”