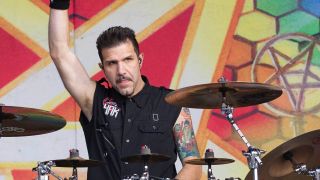 As a drummer, Charlie Benante doesn’t quite seem to get the credit he deserves. After all, he was one of the first heavy metal drummers to perfect the double-bass style (especially within the realm of thrash), is quite possibly the creator of the now common “blast beat” technique, and has penned the majority of Anthrax’s music for some time. Interestingly, his life-changing albums are not all over-the-top, gonzoid metal, as you will soon find out…

I’ll start from the beginning of why this all “happened.” I have to go to a Beatles album. Our backyard was adjacent to our neighbours’ backyards, and we’d always have music blasting outside. When I was really young, my four older sisters were always playing music, and they were always playing the Beatles. I’d have to say they were the first band to change the direction of what I was going to do and what I wanted to be in my life. Revolver and Sgt. Pepper were the two records that I couldn’t get enough of.

The Beatles were the soundtrack to my early, early days, and then the next thing that I got into was Led Zeppelin. I remember having an 8-track player, and playing IV, and how Stairway to Heaven would continue from track two to track three. And then when I would hear it on the radio, it would always sound odd to me, like, “Oh my God…there’s no break!” But IV was a life-changing moment because there was so much amazing music on that record - everything from the heaviest of heavy, like When the Levee Breaks, to the most beautiful, like Stairway.

My next door neighbour would play it outside constantly. Vol. 4 was always played - all the time. I swear, I knew those songs like the back of my hand. Coming from a Catholic upbringing, there was a record store about 15 minutes away from us, and me and my friends used to always go to this place - called Records and Stuff. And they used to sell these iron-on shirts. I remember coming home with this Black Sabbath shirt that had “666” on it, and my mom freaked out and made me take it back! She would not have it in the house.

Probably the biggest thing that influenced me was Kiss. I loved Kiss and knew about Kiss, but it wasn’t until Alive! that I became a total Kiss maniac. That record — to this day — gives me goose bumps. I completely became the general of the Kiss Army, y’know? I couldn’t get enough of them. Look, I know all about this record at this point - that it was done a lot in the studio. But I don’t care. The way those songs were performed on that record, it was just so bombastic. Like, “What the hell is going on here?”

One of the greatest American rock bands. Another one of those live albums that just packed such a wallop. And the way that they performed those songs! It’s just so amazing, because if you listen to the studio versions of those songs, yeah, they were great and everything, but they didn’t have that charm that they had on the live album. It was ferocious. Years later, they released the other part of that show, and that features some of my other favourite songs that weren’t on the original.

This is probably one of my favourite album covers. Growing up and coming from an artist background, this cover would always speak to me. I always wanted to know why this robot has killed Queen [laughs]. And is he sorry for doing it? Because the look on his face is somewhat, “Oh no. What did I do?” But then you turn it over, and you see him cracking a hole in an arena, and you see the people running, and you say, “Was he just misunderstood…or was he on a mission to wipe out civilisation?”

But the shit that was in that record was some of the greatest music that they ever made. Sheer Heart Attack predates thrash metal, and I always said Queen had this riffs that were very “thrash metal.” And then they can do an amazing song like Spread Your Wings, and of course, those two anthems are back-to-back on that record. I mean, who does that?

I used to subscribe to Rock Scene. It was a rock magazine, but it dealt with mostly New York/Lower East Side stories. And they would also feature things that were going overseas, and I remember reading about the Sex Pistols, but there was nothing ever out. And then I remember finally hearing the Sex Pistols on a show on the radio - Pretty Vacant. For me, punk rock wasn’t something that just happened: punk rock was linear. It was something that David Bowie had a piece of, the Stones had a piece of, Alice Cooper had a piece of. The greatest thing about the Sex Pistols was the delivery.

I could say Van Halen I or Van Halen II, but Women and Children First… there is just something about that record that I always go back to. It’s just amazing. It’s so raw, and I think it’s a different record for them. It doesn’t have a really “Eddie Van Halen song” of a solo. It’s just a bunch of great tunes - some of the best tunes they ever wrote. Take Your Whiskey Home has always been a song I was like. I can’t believe this song isn’t more popular, because it just had this great hook to it. And then of course, you have Romeo Delight, Fools - all these songs are just awesome.

To me, these two albums define AC/DC. The way Bon Scott approached singing on Powerage is just awesome. I love everything about it. But then you have Back in Black, which is a flawless record, especially coming after the stuff that happened to the band [Scott’s death, and Brian Johnson joining]. If you think about the amount of time they took to bounce back, it was fairly soon. And they bounced back with that.

I could go to the first Boston album, or Hüsker Dü record…this is a tough one. One of my favourites is a King’s X record, Gretchen Goes to Nebraska. Another record that’s just flawless from start to finish. I got an advance of it, and I was such a big King’s X fan prior to it, and then I heard Gretchen. The guitar tone on that record — still to this day — is one of my favourite guitar tones that’s ever been on a record. I remember saying, “We’ve got to take these guys out on tour,” and we did.