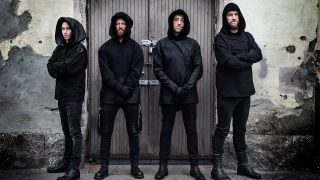 Prog Award nominated Anglo-Finnish prog metallers Wheel have announced a series of headline dates in the UK for February.

"Having been away from the UK for 10 years it's exciting for me to go back with Wheel and to play longer sets than we have managed on previous tours," British-born singer and guitarist James Lascelles told Prog. "This tour is certainly going to be special and nobody should miss out on this!”

The band, who released their acclaimed debut album Moving Backwards earlier this year, will play: