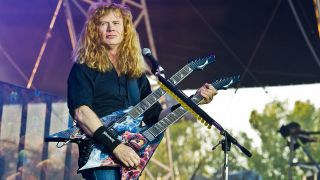 Dave Mustaine has outlined his hopes for how any future Big Four shows might go.

The Megadeth mainman has recently been talking up the chance of returning to stages alongside fellow thrash icons Metallica, Slayer and Anthrax – and this week Metallica’s Robert Trujillo voiced his own support for the idea.

But unlike the historic performances in 2010 and 2011, Mustaine wants each of the leading acts to be given what he calls an “even shot” in front of fans.

He tells Eddie Trunk on SiriusXM (via Blabbermouth): “If the conditions were right I think it would be great – when it’s just the four of us.

“If you do the Big Four and you’ve got four or five little opening bands, that takes away from the phenomenon.

He suggests that Metallica’s leading position resulted in some shows feeling like “three openers and another band” and that there were other limitations to making the most of the events.

“There were a couple of times when we weren’t even all on the same stage,” Mustaine recalls. “When you’re at a festival and one headlining band ends, there’s no way you get from one field to another before the first note starts up of the next band.

“You miss something by doing that, and I don’t think it’s fair. I think, if it’s going to be the Big Four, it should be just the four of us.

“It would be really great if all four of us had an even shot at how we were going to perform.”

Megadeth’s Dave Mustaine: The 10 Albums That Changed My Life