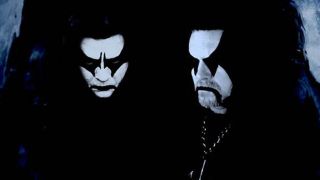 Immortal have hit back at former frontman Abbath, saying he was wholly to blame for the breakdown in their relationship.

Abbath, aka Olve Eikemo, previously said he was sacked by guitarist Harald ‘Demonaz’ Navdal and drummer Reidar ‘Horgh’ Horghagen after he failed in a legal bid to claim the rights to the band’s name.

Now, with the trademark case officially closed by Norway’s patent office Patentstyret, Demonaz and Horgh have released a statement in which they say Abbath’s unreliability was at the heart of his eventual dismissal.

The pair – who are recording new music under the Immortal banner – say: “The conflict was not about anyone leaving the band, as Abbath claimed. It was all about his personal problems. He had cancelled rehearsals and ruined the band’s progress for a very long time. We were forced to confront him about it.

“The band had to reschedule rehearsals all the time because of him. Even then, he did not show up. He told the band, friends, and family that he needed to go to rehab again. He had got help from a clinic before. We offered to wait for him to recover this time also. Sadly, he changed his decision.

“Instead of trying to solve his problems, he went behind our back and secretly applied for a trademark ownership of the band’s logo and name. It was hard to believe that his problems had led him to such a point.

“When his attempt to get the rights was discovered by the band, he all of a sudden went solo. His accusations against the band in media changed from day to day. The fans started to question his version and wanted us to speak about what really happened. Unfortunately, we had to wait until the case was all closed, to make a statement.”

They continue: “His trademark application was denied and the case closed by Patentstyret in November, 2015. One of the reasons was because he had only contributed as a co-writer of music in Immortal. Nor did he contribute any lyrics or titles to the band’s albums. The fact is that the music has always been a result from the band as a unit.”

Immortal’s next album is expected in 2016 on Nuclear Blast Records. The band add: “We are well prepared and looking forward to present the new material to the fans. We did not want to rush things, but take the time to deliver another high quality Immortal album. More news is coming soon.”

Abbath is working in a new group under his own name, with a debut album due Abbath’s debut album will be released in January via Season Of Mist. He debuted a track called Fenrir Hunts via Metal Hammer in October.