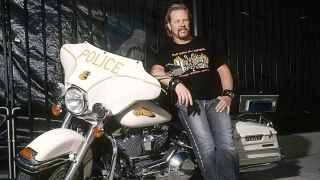 James Hetfield has revealed he stopped riding motorcycles last year in a bid to minimise risks to his health.

The Metallica frontman isn’t the only member of the band to have considered the challenges of continuing to perform at full power as they approach their mid-50s.

Drummer Lars Ulrich recently said the band could continue for 100 years if it was just a question of mental ability – but that they knew the time would come to retire for physical reasons.

Asked about his bike collection, Hetfield tells Jeff Woods Radio: “I sold the one I ride. I’ve got a few customs and things that were built for me, or I helped build. I love that part.

“I had my daily rider and I sold it last year. I just thought, ‘It’s not me, it’s the other guy. Somethings gonna happen, and I want to be healthy, have all my stuff work.’

“I want grandkids to show up, I want to have some fun with them.”

The frontman takes his role as a father seriously – but he’s made sure his kids take his job seriously as well. “I think it’s important that they understand what I do,” he says.

“It’s not just, ‘Dad sits around on the couch and plays guitar.’ There’s hard work that goes into it. It’s important that they see that hard work.

“They see me after a show coughing up a lung or something, or just beat. But they see the joy that I get out of it.”

And he reflects that, on balance, he has a better chance of dealing with any health issues than his bandmates. “Catching on fire, broken arms… I’ve got job security,” he argues.

Metallica released 10th album Hardwired… To Self-Destruct last month. They appeared on US TV show Jimmy Kimmel Live this week, where they discussed how their kids don’t care too much about their dads’ careers – with guitarist Kirk Hammett revealing that his children thought his instrument was “boring.”

The band played a small club show in Hollywood last night (December 15) and appear in Oakland’s Fox Theater tomorrow. They commence their WorldWired global tour in earnest next month, with more dates to be announced in due course.

Lars Ulrich: I hope Metallica will know when to walk away