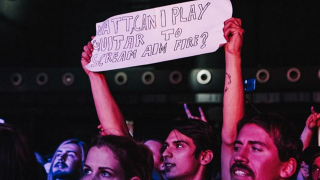 A fan holds up a sign asking to play live with Bullet For My Valentine in Austria...and his wish came true

A Bullet For My Valentine fan’s wish came true when eh was invited up on stage to play live with the band.

The fan held up a sign at Bullet For My Valentine’s gig in Vienna, Austria, last night (November 13) asking frontman Matt Tuck if he could play guitar on Scream Aim Fire.

And before the band burst into the title track from their 2008 second album, Tuck helped the man out of the crowd and handed him his guitar before he played through the song with the Welsh metal heroes. A video of the performance can be viewed below.

Last month, Green Day brought a fan on stage to play guitar on their track When I Come Around.

Bullet For My Valentine are interviewed in the current issue of Metal Hammer magazine, which is available now in print and via TeamRock+.

In the issue, the band discuss the recording sessions for their debut album The Poison. They will play the album in full on some of their upcoming UK tour dates.