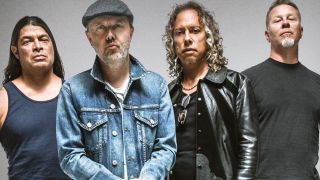 The time is finally here, the BIGGEST METAL BAND IN THE WORLD are releasing their first album since 2008, and Metal Hammer have the essential interview, direct from New York City! Talking to all four members of Metallica, we give you the most in-depth interviews and insights into a band that’ve done it all, but never willing to stop.

The new issue of Metal Hammer is available to order now, and comes with a FREE 15-track CD showcasing the ultimate Metallica mixtape - starring the bands that have helped define the band’s amazing, three-decade-plus career! Starring Discharge, Mercyful Fate, Exodus and more!

Spending two days with Metallica, we dig deep into the minds of all four members. Whether it’s James talking about the crisis he had at turning 50, Lars admitting that he still struggles to find his place in the world, Kirk opening up on the controversial decision to have him not write any material on this album or Rob explaining how he keeps the Metallica family together, this is the biggest, most candid and definitive Metallica interview you will read anywhere this year. Don’t miss it.

Bullet For My Valentine became overnight sensations with their debut album The Poison back in 2005, but what does it mean to the band eleven years on? The band reflect on their sudden rise to dominance and the pain of recording such a personal record.

With another thrash masterpiece (thrashterpiece?) in the can with Brotherhood Of The Snake, we chat to Testament frontman Chuck Billy about its origins in religion, extraterrestrial life, and ancient philosophy. Foil hats at the ready.

To celebrate 20 years of Ozzfest, we talk to the bands that have made it such a metal institution and caused unholy mayhem along the way. With insight from Faith No More, Hatebreed, Steel Panther and more, this is the definitive story behind the festival that changed heavy metal.

Everyone’s favourite circus freaks Avatar have long been considered jokey, but are they more real than most? We get serious with frontman Johannes Eckerstrom and find out what’s going on behind the make-up.

Meshuggah are, in no uncertain terms, game-changers. The rise of tech-metal and djent can be traced back to their inception, and they’re still pushing boundaries almost 30-years into their career. Here, we step into the mind of mainman Tomas Haake in his most personal interview yet.

And a FREE copy of A Brief History Of Slipknot! From their chaotic beginnings to becoming one of the biggest bands in the world, this is the most intimate collection of Slipknot interviews ever!

Our Metallica issue is in stores NOW! And is available to order online right this second!

You can also instantly read the articles from issue 290 of Metal Hammer and dive into the back issues right now on TeamRock+. And experience the interactive digital edition for your iPhone and iPad or Android device.