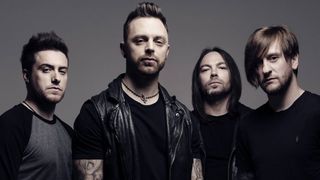 Bullet For My Valentine will play their 2005 debut album The Poison in full for the first time at their Manchester show on December 4.

The Welsh metallers added a second date at the Manchester Academy after the first show sold out. They’ll be supported by Killwitch Engage and Cane Hill.

The tour is in support of last year’s album Venom.

Frontman Matt Tuck previously said of Venom: “The album is hands down the best thing we’ve ever done. To have that arsenal of weapons now and to be able to play these songs feels sick. It’s good to be back.

“That’s kind of what happens in our band. Nothing ever stops. Milestone after milestone and cool event after cool event. We don’t ever do anything which isn’t cool.”

Tickets for the tour can be purchased through the band’s website.

Bullet For My Valentine tour dates 2016

Bullet For My Valentine in Ice Cold Gig documentary