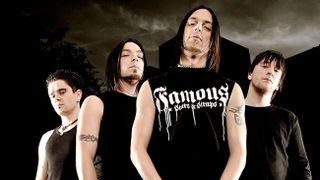 Bullet For My Valentine in 2005 (Image credit: Getty)

Bullet For My Valentine have recalled the disastrous studio sessions with Garth Richardson that saw them living on “one boiled egg a day.”

The Welsh metal outfit were recording their now classic debut album The Poison with producer Colin Richardson at Chapel Studios in England when their record label Visible Noise asked them to travel to Canada to record singles with renowned Rage Against The Machine producer Garth ‘GGGarth’ Richardson.

Both excited and terrified by the prospect, the young band found themselves in financial dire straits in Canada, barely having enough money for food. They were also stunned by GGGarth’s work on the songs – and not in a good way.

Frontman Matt Tuck tells Metal Hammer: “Garth is a lovely guy, but his vision wasn’t for us. He was making us record with the engineers, then he’d take it and fuck with it, and then play it back and have all these crazy delays on the vocals.

“I don’t know whether he was smoking too much weed at the time, but it just wasn’t working. We were basically left there to fend for ourselves as well. We didn’t have a car, him and his staff were living in this huge house, and we were in this shed in the back garden.”

Guitarist Michael ‘Padge’ Paget adds: “We started to run out of money, and we were eating a boiled egg a day. There was no budget for food. Garth was taking our songs to a completely different place. It was like, ‘What are you doing? This is our baby!’

“So it started unfolding pretty bad. Tensions were high because everybody was hungry and away from home.”

When they listened back to GGGarth’s mixes of the songs, Bullet For My Valentine knew they had to speak up and tell Visible Noise they had to start again.

Tuck adds: “We listened back to the tracks, and your ears don’t lie. It’s like, ‘Why are we doing something which is 10 times shittier but, costing 10 times more?’

“Everyone’s heads were dropping, and it was scary as fuck, because we thought we might not have a say in it. We all came home with our heads in our hands on the plane, running to Colin almost in tears.”

Colin Richardson ended up taking over the sessions again back in the UK and The Poison went on to catapult the band to stardom in the world of metal.

The full interview with BFMV can by read in the new issue of Metal Hammer magazine, which is out now in print and via TeamRock+.

Bullet For My Valentine tour dates