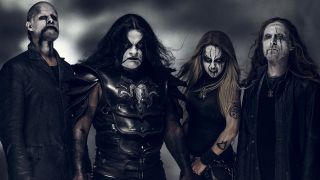 Abbath have announced their return by releasing a video for their new single Harvest Pyre.

It’s the first taste of material from their upcoming studio album Outstrider, which will launch on July 5 via Season Of Mist.

It’ll be the second album from the former Immortal vocalist and guitarist’s band, and follows their self-titled 2016 debut album. He’s joined in the lineup by guitarist Ole Andre Farstad, bassist Mia Wallace and drummer Ukri Suviletho.

A statement on Outstrider reads: “While there are moments that certainly channel the frosty hallmarks of Immortal, there is no danger of Abbath repeating that formula.

Abbath draws from NWOBM and melodic influences, adding a fresh new flavour to the sound that the band’s founder came to define.”

The album contains eight new tracks along with a cover of Bathory’s Pace Till Death and is said to be “a full-on aural assault from start to finish.”

Abbath will play at the Stonehenge Festival in Steenwijk, the Netherlands, on July 27 and at Bergen’s Beyond The Gates Festival in Norway on August 24.