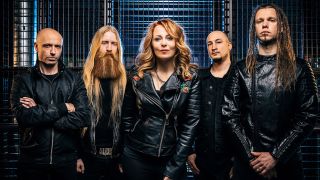 Anneke van Giersbergen’s Vuur have announced a headline UK and European tour for February next year.

They’ll play a total of 16 dates in support of their debut album In This Moment We Are Free - Cities, which was released last month.

The tour will kick off at The Wardrobe in Leeds on February 6 and wrap up at Pratteln’s Mini Z7 on the 25th of the month.

Van Giersbergen says: “We are currently on tour with Epica and we are very grateful they provide the opportunity to play large venues straight after the release of our debut album, but we’re equally excited to return to Europe in February 2018 to play these headline shows!

“The setlist will include most tracks form the Vuur album and my favourites from my heavy back catalogue.”

Prior to the album’s release, Vuur launched the singles My Champion - Berlin, Days Go By - London and Freedom -Rio.