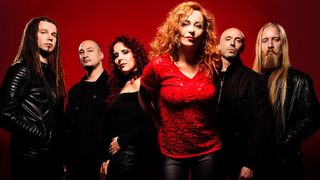 The singer is joined in the group – which is Dutch for Fire – by drummer Ed Warby, bassist Johan Van Starum, vocalist Marcela Bovio along with guitarists Ferry Duijsens and Jord Otto.

The lineup formed the backbone of Arjen Lucassen and Van Giersbergen project The Gentle Storm, who released their album The Diary in 2015.

She says: “I am so so proud to present my new band Vuur. These past few months we have been busy writing and rehearsing songs for our debut album that will be recorded early next year and released in the fall of 2017.

“Be prepared for something heavy, melodic and progressive.”

Speaking earlier this year about her future plans, Van Giersbergen said: “I have a plan and I think it will knock you off your feet – but I really need to take my time and make this new album the best it can possibly be.

“I feel like I’m on the verge of something wonderful.”