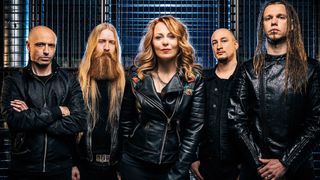 Days Go By - London is taken from the band’s forthcoming, and as yet untitled, debut album which is due out later this year on InsideOut Records.

“The lyrical content of the album is inspired by the many cities I have visited while being on the road,” ven Giersbergen told Prog. “The song Days Go By – London is about The Great Fire in 1666. The lyrics are written from the perspective of the element of Fire, threatening Londoners to wipe them out, but the song is also about hope. Even in the darkest of times, the sun will rise.”

VUUR, who also feature guitarist Ferry Duijsens and Jord Otto (My Propane), bassist Johan van Stratum (Stream Of Passion) and drummer Ed Warby (Ayreon), begin playing live this Summer, and have also been confirmed as main support to Epics in later 2017. You can find the full list of confirmed live dates below: